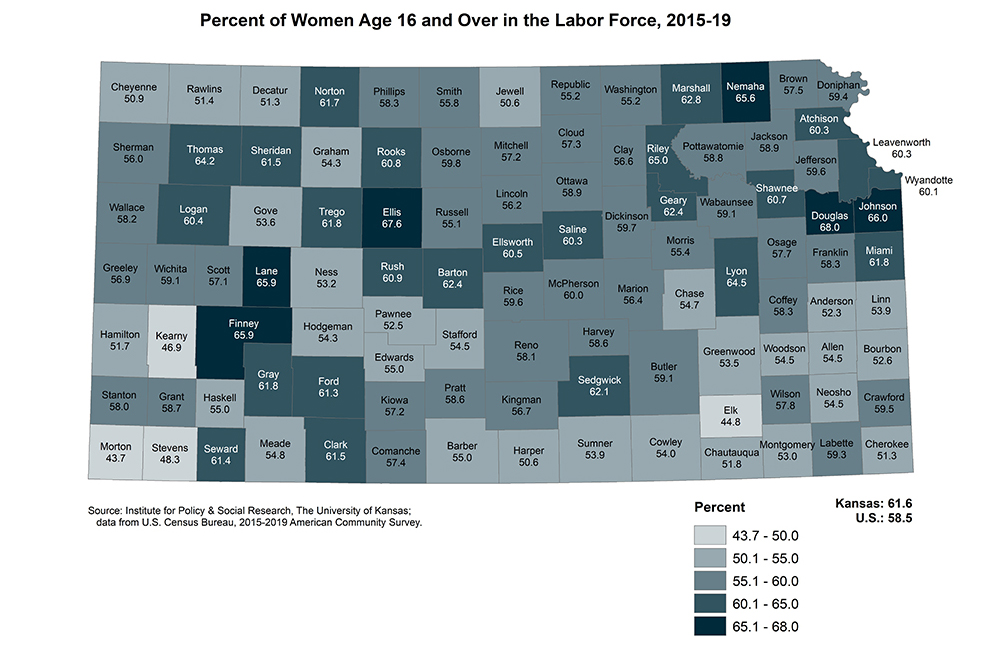 LAWRENCE — New research from the University of Kansas Institute for Policy & Social Research, commissioned by United Women’s Empowerment, shows that existing inequities for Kansas women in the workforce have increased since the emergence of the COVID-19 pandemic in the United States.

A broader look at the status of women showed that Kansas maintains higher female labor force participation in the United States. But in both Kansas and the U.S., female labor force participation for adults between the ages of 25 and 64 is about 10 percentage points lower than for men. The wage gap for women working in Kansas compared to men is higher than the wage gap for the U.S., at 78 cents for every dollar of male earnings in Kansas and 82 cents for every dollar of male earnings in the U.S. In addition, women in Kansas tend to work in occupations that pay lower wages than the occupations common for men in Kansas. Women are significantly less likely to work in management or own a business.

The research team also found that women in Kansas ages 25 to 64 and over the age of 65 are significantly more likely to live in poverty than men. In Kansas, 35% of single-mother households live in poverty. Since 2000, child poverty in Kansas has increased from 9% to 15%.

In its conclusion, the team noted that Kansas could successfully expand the number of women employed if child care costs were reduced — currently, infant care costs are 29% of female median earnings — and if women’s take-home pay increased.

In “The Status of Women in Kansas,” the team’s analysis begins with the hypothesis that economic development is closely linked to the empowerment of women, so the report investigates factors associated with women’s empowerment. The report presents data on demographics, employment and earnings, child care and health care, poverty and social insurance, civic engagement and the status of women during the COVID “she-cession.” The research team, led by Donna Ginther, Roy A. Roberts Distinguished Professor of Economics and director of IPSR, includes Genna Hurd, Xan Wedel, Thomas Becker and Patricia Oslund.

“Factual data is the first step in telling an accurate story of the lives of Kansas women,” Ginther said. “This research validates the importance of removing barriers and advocating for policies that support women, ultimately making families and communities healthier and the economy stronger.”

United WE commissioned this update to a 2016 report on the Status of Women in Kansas and the Bi-State Region.

“The pandemic has brought longtime gender inequities such as pay equity, paid family and medical leave, child care and flexible work options further to the forefront,” said Wendy Doyle, president and CEO of United WE. “It is our collective responsibility to take this research, identify innovative solutions, educate elected officials and community leaders, and unite to advance and support policies that strengthen Kansas women and families for the economic development of our state.”

The full report will be available on IPSR’s website and United WE’s website. Primary data for the report came from the American Community Survey, which is data collected and disseminated by the US Census Bureau.

Image: Percent of Women Age 16 and Over in the Labor Force, 2015-19, in Kansas, by county. The figure shows that participation of women ages 16 and over in Kansas ranges by county from 43.7 to 68%. The average rate of participation for this group in Kansas is 61.6% and in the US is 58.5%. Source: Institute for Policy & Social Research, University of Kansas, data from US Census Bureau 2015-2019 American Community Survey.