LAWRENCE — The University of Kansas School of Education & Human Sciences will honor alumnus John Heim with one of its top awards this spring.

Heim will be recognized at the 2022 Distinguished Alumni Award on May 14 at the school’s spring convocation ceremony at Allen Fieldhouse. 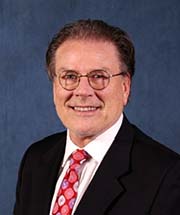 Heim is the executive director and CEO of the National School Boards Association (NSBA), where he has served in his role since 2021. NSBA is a federation of state associations that represent locally elected school board officials serving approximately 51 million public school students. A nonprofit organization, NSBA advocates for equity and excellence in public education through school board leadership. Prior to joining NASB, Heim served as the executive director of the Kansas Association of School Boards (KASB).

Heim earned his bachelor’s degree in secondary education and teaching from KU in 1981. He later received a master’s degree from Fort Hays State University and a doctorate from Kansas State University. Before joining KASB, Heim served as the superintendent at Emporia Public Schools from 1997 to 2010, where he was also an adjunct professor from 2000 to 2010; as a visiting practitioner at Wichita State University from 1997 to 1998; and as executive director of the Educational Services and Staff Development Association of Central Kansas (ESSDACK) from 1994 to 1997.

He has held leadership roles in various public education organizations, serving as president of the Kansas Association of School Administrators; a board of directors member and legislative committee chair of the United School Administrators of Kansas; and as a member of the Mid-continent Research for Education and Learning Superintendents Forum.

The Distinguished Alumni Awards are the highest honor the School of Education & Human Sciences bestows upon its alumni. Award recipients demonstrate ongoing, exceptional professional, academic or research achievement and contribution to the community at the local, state, national or international levels.