LAWRENCE — A University of Kansas expert on the evolutionary history and diversity of insects will present his distinguished professor Inaugural Lecture, “400 Million Years on Six Legs: Evolution of the Insects,” on Thursday, April 29. 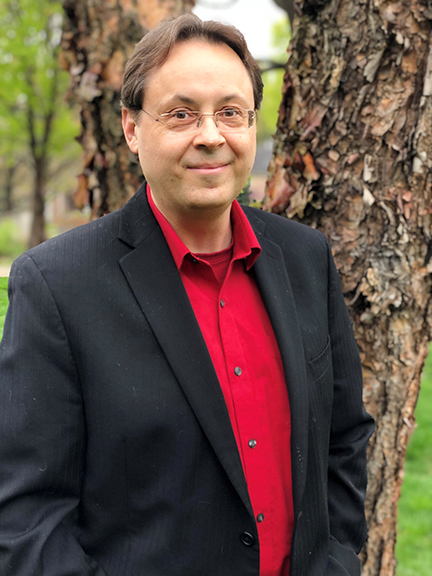 Michael Engel is a University Distinguished Professor of Ecology & Evolutionary Biology and senior curator in the KU Biodiversity Institute, a rank he has held since 2018. He is also a courtesy professor in the Department of Geology and the Museum Studies Program.

Engel is one of a few entomologists in the world to explore insect diversity from a paleontological perspective, unifying information from the fossil record with that gleaned from modern anatomy, behavior, ecology, physiology and molecular developmental biology.

“I combine the study of insect fossils with modern insects to bring about a comprehensive understanding of insect life through time, looking at episodes of origination, diversification and extinction,” Engel said, “along with the major events in insect history and how they shaped insect diversity today.”

During his studies, Engel has discovered over 850 new fossil and living arthropod species, conducting work in over 50 countries – from above the Arctic Circle to equatorial deserts and tropical forests.

His work has revealed the earliest evidence of insects, the origins of wings and flight, and the rise and decline of bees.

“There are nearly 21,000 species of bees throughout the world, but only seven of which are honey bees that people are most familiar with,” Engel said. “The remainder of this diversity, most of which are solitary – rather than living in complex societies like honey bees – is what I’ve worked on. My bee studies, like my other insect work, have also unified paleontology with a study of modern diversity to understand the evolution of these preeminent pollinators.”

Insects are a common but overlooked part of the world’s ecosystem, as more than 50% of all species are insects, and the world could not survive without them. The six-legged creatures whose history spanned at least 400 million years introduced humans to the first of many evolutionary phenomena, which is why Engel believes it is appropriate we work to understand them.

Before arriving at KU, Engel was a research scientist at the American Museum of Natural History in New York. He continues to hold a research affiliate appointment with the museum and works there on an annual basis. He started at KU in 2000 as an assistant professor in the Department of Entomology.

Engel has published over 800 articles in peer-reviewed journals as well as written and edited eight books, including “Evolution of the Insects,” which has served as a textbook for entomology programs throughout the world. His 2018 book “Innumerable Insects,” which combines the history of entomological science and art with an overview of insect diversity and biology, won two Nautilus Book Awards in 2019.

He received bachelor's degrees in chemistry, physiology and cell biology from KU and a doctorate in entomology from Cornell University.