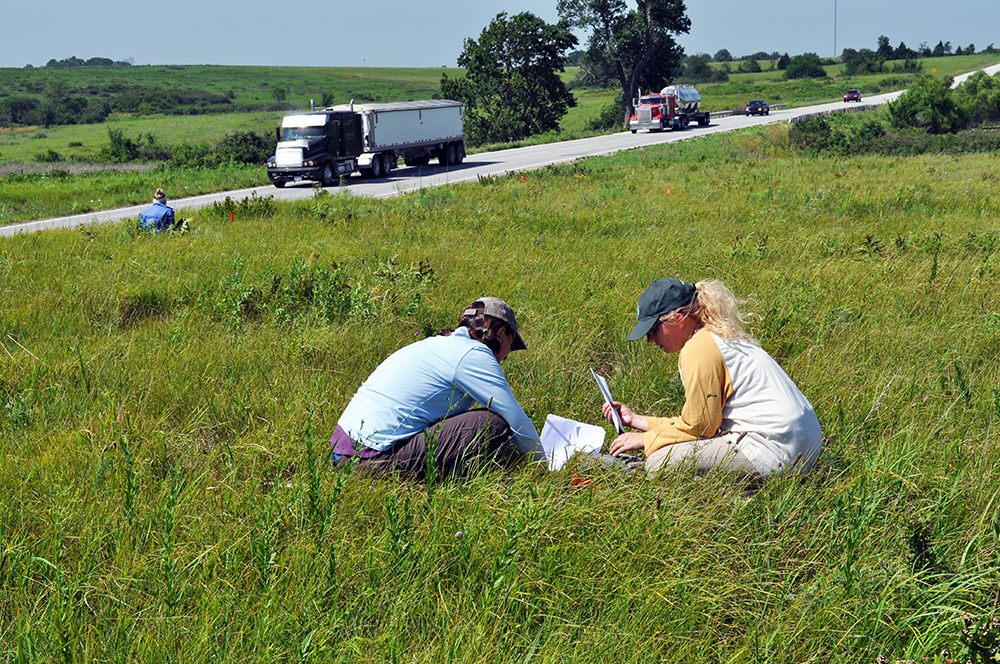 LAWRENCE — The influence of the gut microbiome on human health? That’s become mainstream news. But zoom out on this idea now and consider the land we live on. Scientists believe there’s a strong parallel with the community of soil microorganisms — known as the soil microbiome — and its influence on the health and resilience of grasslands.

Now, University of Kansas researchers at the Kansas Biological Survey, working in partnership with The Nature Conservancy, have an unusual opportunity to study the microbiome of a native prairie. At the Anderson County Prairie Preserve, south of Garnett, several experiments rely on previously undisturbed — but doomed — prairie soils. 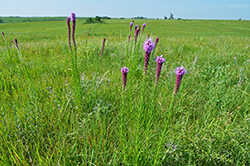 These experiments are helping scientists learn about the soil microbiome’s role in the prairie ecosystem. Specifically, they’re exploring the prairie’s potential for rebuilding itself post-disturbance.

The 1,450-acre Anderson County Preserve, near Welda, is an hour’s drive south of Lawrence. It’s owned by The Nature Conservancy and managed by the Kansas Biological Survey as part of the KU Field Station. For more than 15 years, the two organizations have worked in partnership to develop research at the Anderson County site.

But in 2013, the Kansas Department of Transportation announced that U.S. 169 would be widened from Welda north to Garnett. The road project eventually will take out 60 to 90 feet of land on each side of the highway for about a mile through the Preserve. Survey and Nature Conservancy managers, realizing that a significant strip of native prairie would be lost, saw an opportunity.

“We knew there were lessons we could learn from this land, which eventually will be lost to the highway project,” said Bryan Foster, director of the Field Station, KU professor of ecology & evolutionary biology and Biological Survey senior scientist. “This situation is unusual, and it gives us a chance to try things that, ethically, you otherwise would never do with an intact prairie.”

The Preserve focuses on conservation and serves as a platform for research, teaching and outreach. Four current studies, three of them funded by the National Science Foundation, involve both the Anderson County site’s prairie soils and the Field Station’s core research and operations area just north of Lawrence.

“Offering our preserves for scientific and academic research is one of the best uses of the land we own,” said Rob Manes, director of The Nature Conservancy in Kansas. “Our longstanding partnership with the KU Field Station meant that they could jump at this opportunity. In the end, we’ll all benefit from a better understanding of how the prairie works and how to protect it in the face of a changing climate.”

The microbiome and prairie plant diversity
One of the studies, part of a larger project funded by a $1.7 million NSF Dimensions in Biodiversity grant, begins with the theory that the soil microbiome drives grassland plant diversity. The study is led by Jim Bever, Foundation Distinguished Professor of Ecology & Evolutionary Biology and a senior scientist at the Biological Survey. Co-principal investigators include Foster; Peggy Schultz, lecturer in the Environmental Studies Program and Survey research specialist; Ben Sikes, associate professor of ecology & evolutionary biology and Survey associate scientist; and Helen Alexander, professor of ecology & evolutionary biology

The researchers are considering the microbiome across the east-west rainfall gradient of Midwestern grasslands. The study is expected to shed light on how climate change may be affecting the resilience of the microbiomes — and therefore the prairie — under climate change.

“The loss of prairie to the roadway meant we could harvest the prairie soil microbiome to test these ideas in a large field setting,” Bever said. “It’s the kind of experiment that normally would only take place in a greenhouse, so this is an unusual opportunity. The project wouldn’t have been possible without access to the topsoil from the Anderson County Preserve.”

The overall Dimensions project looks at whether the soil’s microscopic organisms, particularly the balance of mutualistic fungi and pathogens, may be key to the maintenance of plant diversity in grasslands. Ultimately, findings could lead to more sustainable rangelands, and they could improve the yield and resilience of degraded agricultural and native ecosystems.

The project involves a variety of plant groups at a 10-acre site at the Field Station’s core research area. Special structures known as rainout shelters make it possible to regulate the amount of water available to different plantings, simulating differing rainfall and other environmental factors in the east-west gradient across Kansas and the prairie region. Soil from the Preserve was added to a number of the plantings to assess the benefits of a prairie microbiome.

Greenhouse studies
The second study involves “monoliths” — large-scale soil samples with the vegetation and surface undisturbed — from the Anderson County Preserve, as well as sites near Hays and the Konza Prairie Biological Preserve. This project is part of the $20 million NSF EPSCoR grant, “Microbiomes of Plant, Aquatic and Soil Systems Across Kansas” (MAPS), announced in September 2017 and involving five Kansas universities.

The MAPS project is aimed at increased understanding of how the microbiome influences environmental changes. Findings could have an impact on key issues for the state, including agricultural sustainability, water quality, greenhouse gases, plant productivity and soil fertility.

The monoliths from the three sites are 12 inches wide and 30 inches deep. They were transported to the greenhouse complex at the Field Station’s core research area.

Terry Loecke, assistant professor in the Environmental Studies Program and assistant scientist at the Kansas Biological Survey, leads the study.

“In the greenhouse we can experimentally manipulate the amount of water the monoliths receive, simulating changes in precipitation,” he said. “This will shed light on how prairie ecosystems are maintained and how they respond to climatic changes.”

In addition to greenhouse experimentation, this study involves conservation areas on the Anderson County Preserve, which serve as undisturbed monitoring sites to be compared with sites near Manhattan (Konza) and farther west near Hays.

The edge effect
A third study involves the transfer of much larger monoliths. The cone-shaped samples, 4 feet wide and deep, were lifted with a tree spade from the doomed roadside area and moved to several other sites in the Anderson County Preserve where native prairie was destroyed long ago by tillage.

The monoliths were placed, in various configurations of one to six, into different types of soils that fall into three categories — along what scientists refer to as a disturbance gradient. The site with greatest disturbance is a recently disked field. The other two sites are an old agricultural field, fallow more than 10 years; and an area under restoration to native grassland for 20 years.

Theo Michaels, a KU doctoral student in ecology & evolutionary biology, leads the project. She and other researchers are watching for “edge effects,” studying whether the prairie microbiomes spread beyond the monoliths and improve ecosystem function of the disturbed sites. The research tests ecological theory and provides a practical demonstration of a novel prairie restoration technique.

The project was recently selected for $71,000 in new funding through an NSF Research and Education Innovation Award within the same Kansas EPSCoR program referred to above. Michaels’ advisers are Jim Bever and Ben Sikes.

Survival of a key plant
Finally, a smaller experiment will determine whether the federally protected plant Mead’s milkweed (Asclepias meadii) can survive and thrive after being moved. The Preserve is home to one of the world’s largest populations, with some plants growing in the area slated for destruction. Mead’s milkweed is considered an indicator species for healthy prairies and is highly sensitive to disturbance; wild-growing individual plants have never been transplanted successfully.

With approval from the U.S. Fish and Wildlife Service, researchers at the Biological Survey and The Nature Conservancy moved several plants from the future roadway to a restoration area at the Preserve, where they will be monitored to determine their long-term survival rates.

The Kansas Biological Survey, a KU designated research center, was established at KU in 1911. It houses a variety of environmental research labs and remote sensing/GIS programs in Takeru Higuchi Hall and the West District greenhouse. It also manages the 3,700-acre KU Field Station, a site for study in the sciences, arts and humanities.

Top photo: Highway 169, which runs through the Anderson County Prairie Preserve, is slated for widening and will take out a strip of native prairie lands. Photo by Kirsten Bosnak.

At right: Deeper into the Prairie Preserve, gayfeather and other native flowers bloom abundantly. Photo by Kirsten Bosnak.