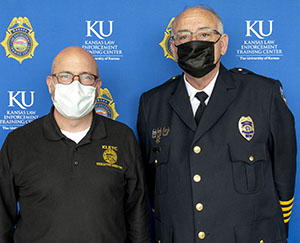 Officer Jason Boyd of the Conway Springs Police Department was the graduating class president. The speaker for the ceremony was the chief of police for the Derby Police Department, Robert Lee. Troy Livingston, KLETC senior instructor of police, was the class coordinator for the 276th Basic Training Class.

Officer Eric Moore of the Ottawa Police Department was the recipient of the Welsh Academic Award of Excellence, an award given to the student with the highest academic score in their class at 94% average or higher. Moore graduated with an average of 96%. Deputy Cameron Beakley of the Rice County Sheriff’s Office was also recognized during the ceremony for his firearms proficiency as the class’ “Top Shot."

About 300 officers enroll annually in KLETC 14-week basic training programs. KLETC offers continuing education and specialized training to over 10,000 Kansas officers each year. KLETC is located one mile west and one mile south of Yoder, near Hutchinson, and is a division of the University of Kansas Lifelong & Professional Education.

The graduates, who began their training in December 2020, represented 19 municipal, county and state law enforcement agencies from across Kansas. Graduates are listed below by county and agency: