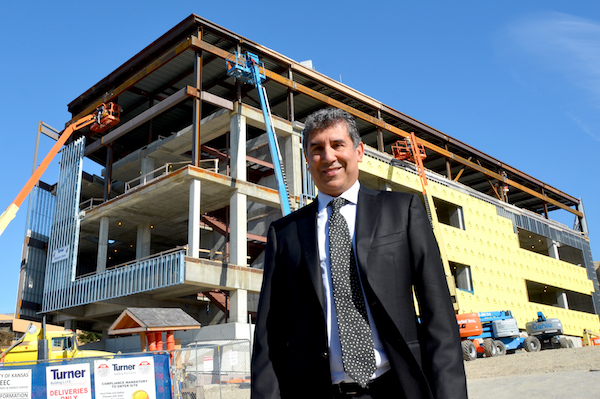 LAWRENCE — Shahin Negahban remembers the difference that KU faculty made in his own life. Now he’s ready to leave a legacy of his own.

Negahban, the new director of the Tertiary Oil Recovery Project at the University of Kansas School of Engineering, got his doctorate in chemical & petroleum engineering from the university in 1986. He remembers his days in Lawrence with professors like Stan Walas, Paul Willhite, Bill Swift and Don Green as formational and a chance to assist in research, to collaborate with fellow students, and to prepare for the future.

“The support they provided for me was amazing,” Negahban said.

After three decades in the petroleum industry working for BP — much of that time in oil-rich Abu Dhabi — Negahban has returned to KU. His goal: build on TORP’s mission of helping Kansas oil producers get the most out of their sometimes tough-to-crack reserves and use that tradition as a foundation to help TORP become a global powerhouse.

And along the way, he wants to help the next generation of researchers get their start.

“When you work for an industry, you do research — you don’t feel like you left any legacy,” he said. “Coming back to academia, you do research, but you also train people, youngsters for the future. One thing our industry really needs right now is a new workforce that can face really complicated technical challenges, in terms of energy and the environment.”

TORP was formed more than 40 years ago to educate students about how to extract oil reserves from increasingly difficult locations and also to pass along knowledge, technology and techniques to the state’s oil producers.

Negahban’s vision for TORP is to make it a world-class research and development facility — one that feeds techniques developed in Kansas to the oil fields of Middle East, for example.

“Kansas is very unique,” he said. “They have carbonate reservoirs that are very similar to those huge reservoirs of the United Arab Emirates and Saudi Arabia or Kuwait. We can test the concepts in Kansas and then scale it up.”

His three-point plan to grow TORP involves attracting more talented undergraduate and graduate students to the school, finding increased funds for research and development and speeding the process of getting TORP’s technology out of the lab and into the real world. That should attract funding to the school, he said, to aid the process along.

“We need to do these things in parallel,” he said. “We can’t wait to establish one and do the other.”

Attracting talented students is a critical part of the plan. Petroleum jobs can be lucrative, but the oil industry is prone to booms and busts. Negahban says he encourages students to get in even during the down times — which he says is prime time for the industry to develop talent, techniques and technology to use when the boom times return.

“The most successful strategy is that you plan for the future so you don't react,” he said.

TORP will also be aided by the opening of the new Earth, Energy & Environment Center in the fall of 2017.

“The vision there is we are going to build a state-of-the-art laboratories for rock and fluid characterization,” Negahban said.

The labs will be able to simulate real reservoir pressures, temperatures, and salinity conditions to help TORP’s researchers refine techniques before taking them to the field.

“We’ll have a really good tool to forecast what’s going to happen in a larger scale,” Negahban said.

Amidst all these big plans, Negahban said, TORP will increasingly be keeping an eye on how its practices affect the environment.

“We are looking at research and development topics under the umbrella of energy and environment, because the nice thing about that is you can get more technical and financial support from both sides, and particularly if you can work there where they intersect.”

The goals are big. But underlying them are simple hopes.

“I just want to leave something behind,” Negahban said, “so when I get older and I'm retired I can have a lot of students and a lot of good memories to think about.”