LAWRENCE – Bria Nelson, a recent graduate of the University of Kansas School of Law, is a recipient of a 2021 Equal Justice Works Regional Public Interest Award. Nelson is one of eight students selected for the national award, which recognizes law students for their exemplary commitment to public interest law and pro bono work.

As a law student, Nelson’s passion for racial justice initiatives led them to serve at several legal services organizations, including the Disability Rights Center of Kansas and the ACLU of Kansas Clemency Project. This spring, they worked as a legal extern with the NAACP Legal Defense and Educational Fund Inc. in Washington, D.C. 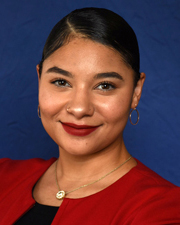 “My experiences in various organizations both inside the law school and outside of the law school in the Lawrence community and greater legal institution have shaped my values, beliefs and who I am today,” Nelson said.

“While the fight for equality may never be won, I believe elevating the voices of those who are often not heard or misunderstood will push us further toward our goal. I plan to do just that throughout my public interest career,” they said.

“We are delighted and proud to recognize Bria for their exemplary service at KU Law and at legal aid organizations in the Lawrence community,” said Aoife Delargy Lowe, vice president of law school engagement and advocacy at Equal Justice Works. “Bria is an impressive law student whose unwavering commitment to helping others is truly inspiring.”

At KU Law, Nelson was president of the Dean’s Diversity Leadership Council, treasurer of Black Law Students Association, a campus student representative for Equal Justice Works, a law student ambassador and class vice president for the Student Bar Association. They also participated in OUTLaws & Allies and the undergraduate ACLU of KU student organization.

Nelson recently received the law school’s inaugural Dru Mort Sampson Center for Diversity & Inclusion Award of Distinction. The award is given to the student who, in the opinion of the law faculty, has exhibited exemplary leadership and a commitment to promoting diversity and belonging – both in Green Hall and in the law school’s broader communities. Nelson also received the Distinguished Graduate Award from the KU Office of Multicultural Affairs, which honors graduate students doing excellent work, both in and out of the classroom. Nelson earned Pro Bono Distinction at graduation for completing more than 50 hours of unpaid legal service during law school.