LAWRENCE — Many cancers in modern humans are caused by exposure to toxins, pollution, radiation and unhealthy diets over a long period of time. 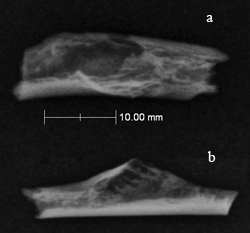 That’s what’s extraordinary about the news that a team of researchers has identified evidence of fibrous dysplasia, or bone cancer, in the rib of a 120,000-year-old Neandertal from Krapina, Croatia. The findings are included in the forthcoming edition of PLoS ONE, a prestigious peer-reviewed journal.

“It’s evidence that Neandertals suffered tumors — that they were susceptible to the same kinds of diseases that we see in modern humans,” said David Frayer, professor of anthropology at the University of Kansas, who co-authored the paper. “Before this, the earliest tumor in bone that we’ve seen goes back to an Egyptian mummy. So this is 100,000 years older than the previous tumor that has been found. There is no evidence of cancer older than this in the human fossil record.”

The bone where the tumor was discovered isn’t associated with a complete skeleton, Frayer said. So researchers don’t know if the tumor afflicted a male or female, or precisely how old the adult individual was at the time of death, or even the cause of death.

“It may have involved other bones of the skeleton, but none of those have been found,” said Frayer. “At this site, there are more than 900 bones, but very few of them are associated one with the other. And while there are other pathologies, none of the others show evidence of a tumor.”

For years, most scientists were convinced that Neandertals didn’t factor into the evolutionary line that results in modern humans. However, within the past decade, genetic analysis has revealed that Neandertals were forefathers of present-day peoples.

“We have actual nuclear DNA from a number of different Neandertals — not complete sequences — but segments of nuclear DNA,” said Frayer. “So we know that Neandertals have a set of unique genes that were passed on to modern humans. It’s about 4 percent of our genetic makeup.”

According to the researchers, the Neandertal bone from Krapina, Croatia, is a 30-millimeter-long fragment of the left rib that shows a fresh break. The break in the rib exposes a chamber that is 18 millimeters in length and 7.6 millimeters wide. This cavity in the bone is highly unusual — ordinarily a rib is packed with cancellous bone — and, after analysis with radiograph and CT scans, the investigators came to believe it was the site of a benign tumor associated with fibrous dysplasia.

Fibrous dysplasia “is a developmental disorder of bone in which lesions develop fibrous tissue and spicules of woven bone,” the researchers write. However, it’s difficult to know for certain how severely the tumor affected the Neandertal individual.

“It wasn’t a small tumor,” Frayer said. “It was a fairly large one, probably bulging at the base of the rib. We’re not sure how far along it was, but it was well-expressed in the bone. It was in the upper third of the back, and muscles attach there that are associated with raising the arm.”

Frayer’s colleagues on the paper are Janet Monge and Morrie Kricun of the University of Pennsylvania, Alan Mann of Princeton University, and Jakov Radovcic and Davorka Radovcic of the Croatian Natural History Museum.