LAWRENCE — Less than three years after opening its doors, the Bioscience & Technology Business Center (BTBC) at the University of Kansas has taken the next step in its ongoing economic development success story.

That step was a groundbreaking ceremony today at 10 a.m. for an expansion of the BTBC main facility, located at 2029 Becker Drive on KU’s west campus. Kansas Gov. Sam Brownback spoke at the ceremony, along with KU Chancellor Bernadette Gray-Little, Lawrence Mayor Mike Dever and Doug Cleverly, CEO of Argenta, a global animal health leader that operates a laboratory in the BTBC. 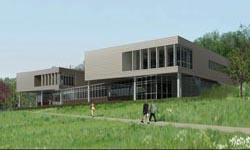 “The BTBC is already more successful than we dreamed it would be,” said BTBC Executive Chairman LaVerne Epp. “We always planned to add more space, but we didn’t think we’d need to until 2015. The market demand is there now, so we’re moving forward ahead of schedule.”

The main facility reached full capacity a year ago, with nine tenant companies totaling more than 60 employees. Once completed in fall 2014, the new $10 million expansion will add 30,000 square feet of space to the existing 20,000-square-foot facility. The expanded facility will accommodate 18-24 companies at various levels of development, including startups 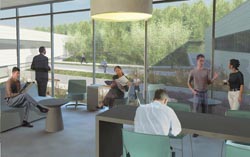 based on KU research, other early-stage companies and private industry companies wishing to collaborate with KU researchers.

“The mission of the BTBC remains ‘Transforming Ideas into Commerce,’” said Epp. “We are raising the profile of Lawrence and KU nationwide and creating high-quality jobs in Kansas. The BTBC is fulfilling its mission and exceeding all expectations.”

The expansion provides new wet-lab and dry-lab space, as well as conference rooms and offices for the KU Center for Technology Commercialization (KUCTC), the university’s principal resource for industry partnerships, intellectual property protection and management, and community economic development.

The main facility is located across the street from the highest concentration of life science and technology labs in the state, as well as KU’s nationally prominent School of Pharmacy. Relocating the KUCTC to the BTBC brings it closer to many of KU’s most innovative bioscience researchers.

“KU’s mission is to lift students and society by educating leaders, building healthy communities and making discoveries that change the world,” said Gray-Little. “That includes growing the economy and creating a more prosperous Kansas, and the BTBC is a crucial part of that mission. Now more than ever, KU is creating new companies, jobs, products and cures, and making Lawrence an attractive location for companies to locate.”

Funding for the expansion is provided by KU Endowment, the KU Center for Research, Inc., the city of Lawrence, Douglas County and the Lawrence business community. The $7.25 million first phase of the main facility was funded by these organizations and the Kansas Bioscience Authority.

About the BTBC at KU

The Bioscience & Technology Business Center at KU is the largest company-creation and business attraction and development organization in Kansas. Currently, it offers 70,000 square feet of leasable space at the main facility and two additional facilities in Lawrence, plus the KU Medical Center in Kansas City, Kan. At all locations combined, the BTBC has 29 tenant companies with more than 100 employees.

Because of its proximity to the KU campuses, the BTBC offers tenants several unique resources, including access to KU’s intellectual property, world-class researchers, specialized equipment and labs, and students and graduates. It also provides business expertise (planning, talent management, education, capital acquisition, market validation and research, growth strategy, governance) to startup and early-stage companies that wouldn’t have access to it otherwise.

RT @kulibraries : A recently-awarded $350,000 grant from @NEHgov will help improve the physical environment in the collection storage areas…
«»
Follow us on Twitter »
Why KU
Apply »
One of 34 U.S. public institutions in the prestigious Association of American Universities
44 nationally ranked graduate programs.
—U.S. News & World Report
Top 50 nationwide for size of library collection.
—ALA
5th nationwide for service to veterans —"Best for Vets: Colleges," Military Times