LAWRENCE — A new device created by two recent graduates from the University of Kansas School of Engineering is leading to increased satisfaction and productivity for a group of workers at a Lawrence nonprofit organization that provides job opportunities for people with developmental disabilities. 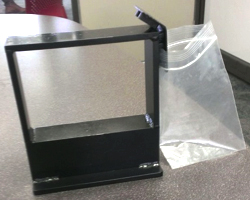 Haley McKee and Aaron Porter, both Overland Park residents who earned bachelor’s degrees in mechanical engineering in May, created a device known as the “Bagging Buddy” for workers who have limited or no use of one hand at Lawrence’s Cottonwood Inc. Their device aids a number of workers who struggle to hold bags open, slide items in and close the bag. Cottonwood has a number of projects that involve packaging items in this manner.

McKee and Porter developed the Bagging Buddy after creating a series of prototypes and meeting several times with Cottonwood to gather feedback on the best designs. The inspiration for the final design did not spring specifically from the lab, but from a favorite way for many KU students to take a break from the books.

“I was watching a KU basketball game one night and thinking of how the ball travels through the basket, and that became the basic idea behind our end product,” McKee said.

The Bagging Buddy is essentially a small steel frame that utilizes magnets and a series of clips set at different angles to provide users with a number of options for keeping the bag open while they fill it with material and then close it, completely independently and all with one hand.

“They wanted it to be simple in design and use. At first, that was kind of hard for us,” McKee said. “Sometimes engineers can make things more complex than they need to be, so it was a fun challenge to scale it back a little bit. We ended up with a simple, effective and inexpensive device.”

The project was part of a mechanical engineering senior capstone design course led by Ken Fischer, associate professor of mechanical engineering. The work was possible through a National Science Foundation grant, called Biomechanical Rehabilitation Engineering Advancement in Kansas, awarded in September 2012 to provide funds so KU engineering students can create custom assistive devices for individuals with special needs in Kansas.

“One of the many great things about this project is that it gets students involved and excited about the service learning aspect of engineering,” Fischer said. “It can show students what’s available in this area so they can see the benefits of a career in rehab engineering or assistive device design.”

Staff members at Cottonwood said they worked to find ways to make bagging items easier for workers, but limited time and resources made it challenging, so the assistance from the School of Engineering was certainly welcome. In addition to a more satisfying and efficient work environment, the Bagging Buddy has a direct benefit to the workers’ bottom line, since they are paid in part by how many items are bagged.

“The Bagging Buddy can reduce the frustration of Cottonwood workers who want to work independently,” said Steve Steinbach, senior production coordinator at Cottonwood. “Increased productivity means a bigger paycheck for those workers, and that’s a big plus as well.”

For McKee, seeing the Bagging Buddy project through from concept to completion was more rewarding than she’d originally anticipated.

“At the beginning it was this nebulous idea of helping ‘somebody,’ so to actually see people use it, and the result that it had on one individual as opposed to just the concept of ‘helping people,’ it was really neat,” McKee said. “There was one worker who had never been able to successfully fill a bag in 10 years working there, and this device helped him to finally do it. Everyone gathered around to cheer for him, he was thrilled, and it was pretty exciting to see it all unfold.”

“The most rewarding part was being able to create something that simply removed obstacles in people’s lives so they could follow their own initiative to be productive in the work place and be a part of a team,” Porter said.

Fischer said the School of Engineering plans to construct four additional Bagging Buddy devices and give them to Cottonwood to ensure it is available to all employees that may need it at a given time. There are currently no plans to commercially produce the device, Fischer said, but McKee and Porter own the intellectual property rights, so they could decide to seek a patent and then potentially receive revenue from licensing fees and royalties.