LAWRENCE — Tyrannosaurus rex has long been popular with kids and moviemakers as the most notorious, vicious killing machine to roam the planet during the age of the dinosaurs. 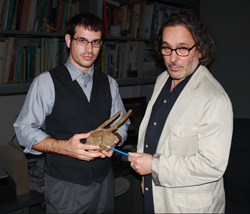 So, it may come as a shock that for more than a century some paleontologists have argued that T. rex was a scavenger, not a true predator — more like a vulture than a lion. Indeed, a lack of definitive fossil proof of predation in the famous theropod has stirred controversy among scientists — until now.

“T. rex is the monster of our dreams,” said David Burnham, preparator of vertebrate paleontology at the Biodiversity Institute at the University of Kansas. “But ever since it was discovered in Montana and named in the early 1900s, there’s been a debate about whether these large carnivores were scavengers or predators. Most people assume they were predators, but the scientific evidence for predation has been really elusive. Yes, we’ve found lots of dinosaur skeletons with tooth marks that had been chewed up by something. But what did that really prove? Yes, these large carnivores fed on other dinosaurs — but did they eat them while they were alive or dead? That’s where the debate came in. Where was the evidence for hunt and kill?” 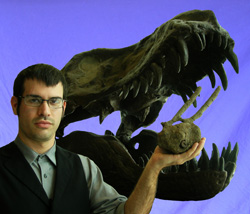 Now, Burnham is part of a team that has unearthed “smoking gun” physical proof that T. rex was indeed a predator, hunter and killer. In the Hell Creek Formation of South Dakota, Burnham and colleagues discovered the crown of a T. rex tooth lodged in the fossilized spine of a plant-eating hadrosaur that seems to have survived the attack. The team describes the find in the current issue of the Proceedings of the National Academy of Sciences.

Burnham’s KU co-authors are Bruce Rothschild and the late Larry Martin, along with former KU student Robert DePalma II of The Palm Beach Museum of Natural History and Peter Larson of the Black Hills Institute of Geological Research.

“Robert DePalma was a student here at KU doing his master’s thesis in the Hell Creek formation,” said Burnham. “He found a specimen that represents the tail of one of these hadrosaurs. It had a distorted-looking bone growth. He came to me and said, ‘What do you think is causing this?’ So we cleaned it and could see a tooth embedded in one of these duck-billed dinosaur vertebrae. Then we went to Lawrence Memorial Hospital and used a CT machine to scan the bones — and we saw all of the tooth.” 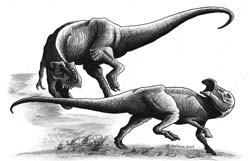 Previous evidence for predation included T. rex fossil discoveries with preserved stomach contents that included the bones of a young ceratopsian (e.g., Triceratops or one of its kin). However, there was no evidence to conclude whether the ceratopsian was alive or dead when the T. rex made a snack of it.

By contrast, Burnham said the tooth was definitive evidence of hunting, after carefully measuring its length and the size of its serrations to ensure that it came from the mouth of a T. rex.

“Lo and behold, the tooth plotted out just exactly with T. rex — the only known large theropod from the Hell Creek formation,” he said. “We knew we had a T. rex tooth in the tail of a hadrosaur. Better yet, we knew the hadrosaur got away because the bone had begun to heal. Quite possibly it was being pursued by the T. rex when it was bitten. It was going in the right direction — away. The hadrosaur escaped by some stroke of luck. The better luck is finding this fossil with the preserved evidence.”

Because T. rex regularly shed its teeth, the predator went away hungry, but otherwise no worse for the encounter. It would have grown a new tooth to replace the one left behind in the hadrosaur’s tail. This could have been a typical example of T. rex’s hunting efforts, even if it didn’t result in a meal.

“To make an analogy to modern animals, when lions go attack a herd of herbivores, they go after the sick and the slow,” Burnham said. “Most of the time, hadrosaurs traveled in packs. This hadrosaur may have been a little slower, or this T. rex may have been a little faster — at least fast enough to almost catch a duck-billed dinosaur.”

This concrete proof of T. rex’s predation continues a long relationship between KU paleontologists and the theropod, which lived in North America during the Late Cretaceous, some 65 million years ago. KU graduate Barnum Brown discovered the first documented remains of the dinosaur in Wyoming in 1900.