LAWRENCE — The 2013-14 University of Kansas Women of Distinction calendar will honor 24 female students, staff and faculty and alumnae for outstanding achievements. 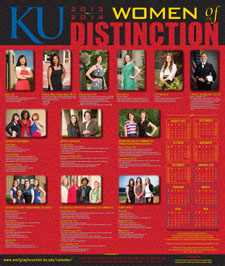 Those featured in the 2013-14 Women of Distinction calendar are listed below.

Alesha E. Doan is an associate professor of political science and chair of the Women, Gender and Sexuality Studies department. In 2012, she received the Outstanding Young Professional Award from the Population, Reproductive and Sexual Health Section of the American Public Health Association. Doan has published two successful books, titled “Opposition and Intimidation: The Abortion Wars and Strategies of Political Harassment,” 2007, and “Politics of Virginity: Abstinence in Sex Education,” 2008.

Alexis Knutsen is a senior from Overland Park majoring in classical languages. She is the founder of the women’s English class “A Cup of Conversation,” which began during the 2012-13 academic year. Knutsen is a Critical Language Scholarship recipient for Arabic study in Oman during the summer of 2013 and a Foreign Language and Area Studies scholarship winner for Arabic study for the 2013-14 academic year.

Mulubrhan (Mulu) Evangline Negash received her bachelor’s and master’s degrees from KU as a McNair Scholar and Dean’s Scholar. She now serves as director of the McNair Scholars Program, helping low-income, first-generation college students in the Center for Educational Opportunity Programs of the Achievement and Assessment Institute.

Alyssa Ong is a senior from Malaysia majoring in finance and accounting. Winner of the 2013 Student Leadership Award, Ong is a Clinton Global Initiative University (CGI U) campus representative and founder and president of CGI U-KU, where she works with students interested in initiating service projects in the community.

Lt. Molly C. Rutledge was selected as the 2013 U.S Public Health Service Junior Officer Therapist of the Year. Lt. Rutledge is a speech-language pathologist working with the Navajo American Indian Reservation at the Tsehootsooi Medical Center at Fort Defiance, Ariz. She developed and manages a comprehensive speech-language program that addresses all speech/swallowing/cognitive disorders for patients of TMC and the IHS community. She is a previous recipient of the U.S. Public Health Service Achievement medal and a two-time winner of the Excellence Awards for Continuing Education from the American Speech-Language Hearing Association.

Jill Wenderott is a senior from Alma studying physics. She was a 2011-12 University Scholar in the Honors Program and served as Center for Community Outreach executive director for the 2012-13 academic year. In 2013, Wenderott was named a Research Award Winner.

Maggie Hull-Tietz, Lawrence, graduated this spring from the William Allen White School of Journalism and Mass Communication and also played four years with the Jayhawk softball team. The Free State High School graduate was a Third Team Capital One CoSIDA All-American and a First Team Capital One CoSIDA Academic All-American. She was selected 11th overall to the Chicago Bandits in the 2013 National Pro Fastpitch League Draft.

Rosie Hull, the sister of Maggie Hull, mentioned above, was an integral member of the KU softball squad. Rosie was on the Academic All-Big 12 First Team for three straight seasons and a 2013 Gerald Lage Award Winner, the Big 12 Conference’s highest academic honor. She is a member of the Phi Beta Kappa National Academic Honorary Society and graduated from KU in 2013.

Advocates for Change
Vicky Reyes
is a senior in elementary education and a resident assistant in McCollum Hall since 2012. In 2013, she founded KU’s chapter of Hermandad de Sigma Iota Alpha Inc., a historically Latina-based national sorority that strives to expand awareness of the Latino culture, promote sisterhood and leadership, and serve as a model of excellence in academics and achievements among women. The Garden City native has twice been named the Hispanic American Leadership Organization Member of the Year.

Amanda G. Johnson, recent KU alumna, was on the KU honor roll and was the Dr. Fred Rodriguez Academic Achievement Award winner for spring 2013. She served as National Pan-Hellenic Council president in 2012.

Fatoumata Bayo is a senior from Warren, Mich., majoring in chemistry and psychology with an emphasis on pharmaceutical studies. Bayo won Student Organization Member of the Year at the Jayhawk Choice Awards for her work with the Black Student Union. She also received both the Martin Luther King, Jr. and the Nelson Mandela awards as a member of the Big 12 Council on Black Student Government.

Reconstructing Voices: Women in the Humanities
Giselle Anatol
is an associate professor and director of graduate studies in English. Anatol was a Conger-Gabel Teaching Professor from 2001-04 and won the Mabel S. Fry Award for Teaching in 2001 for excellence in both classroom teaching and graduate student mentoring. She participated in the New York Public Library’s Schomburg Center for Research in Black Culture Scholar-in-Residence fellowship program in 2012.

Jill S. Kuhnheim is a professor in the Department of Spanish and Latin American Studies and director for the Center for Latin American and Caribbean Studies. She has been granted the Hall Center for the Humanities Research Fellowship twice (2001, 2011) and won the KU Cramer Award for Outstanding Research in both 2002 and 2004. Kuhnheim’s “Spanish American Poetry at the End of the 20th Century: Textual Disruptions” was awarded the Byron Caldwell Award for best book in the humanities from the Hall Center in 2005.

Dorthy Pennington, associate professor of communication studies and African and African-American Studies, received her master’s degree and doctorate from KU and was awarded numerous Kansas Humanities Grants for 1982-83, including a public research grant compiling histories and cultural roles of black churches in Lawrence. She earned the Teaching Achievement Recognition Award in 2002 from the KU Center for Teaching Excellence and has been an invited speaker to Oxford University three times.

Kathy Porsch serves as a grant development officer for the Hall Center for Humanities and is a KU alumna (Master of Science, 1990). During her time as a student, she was initiated into the Phi Kappa Phi National Honor Society and the Kappa Tau Alpha Honor Society of Journalists. Last year, she received the Staff Appreciation Award from the College of Liberal Arts and Sciences.

Students Transforming the World
Brittany Krutty is a physics graduate student who earned her Bachelor of Science from KU in 2013. She served as KU Habitat for Humanity president for the 2011-12 academic year and earned a Goldwater Scholarship in 2012. Krutty was selected as a Self Graduate Fellow for 2013. She is a native of Olathe and Troy, Mich.

Nicole Nunes, Wichita, is a senior majoring in journalism and minoring in business and psychology. She served on the Alpha Delta Pi Executive Board from 2012-13 and was Order of Omega President for 2012-13. She currently holds the vice president position of the Journalism Student Ambassador program for the 2013-14 year.

Natalie Scott is a senior from Topeka majoring in psychology. Scott was a University Scholar for the 2012-12 academic year and served as the spring break and fundraising coordinator for Alternative Breaks from 2011-13. She also held the position of orientation coordinator for the Office of First Year Experience for 2012-13.

Hannah Sitz is a senior from Andover majoring in journalism and psychology. She has been co-director of KU Alternative Breaks since 2012 and earned a Coro Kansas City Summer Internship in Public Affairs in 2012. Sitz was also named a Harry S. Truman Scholar in 2013.

Promoting Healthy Communities through Education and Advocacy
Dr. Paige Geiger is a KU alumna (Bachelor of Arts, 1995) and an associate professor of molecular and integrative physiology. She earned Association of American Medical Colleges’ Early Career and Mid-Career Women Faculty Professional Development Conference scholarships in 2008 and 2012 and served as president of the KU School of Medicine Women in Medicine and Science for the 2012-13 year. She will continue to be a regular member of the NIH Integrative Physiology of Obesity and Diabetes Study Section through 2017.

Jenny McKee earned her Master’s of Science in Education from KU and now serves as health educator and grant coordinator for the Health Education Resource Center, which provides prevention health education to thousands of KU students regarding alcohol and sexuality. McKee is also a Safe Zone facilitator and was nominated for Douglas County AIDS Project’s Spirit of DCAP Award in 2012.

Artistic Achievers
Barbara A. O’Brien is currently the executive director of the Kemper Museum of Contemporary Art in Kansas City and holds two degrees from KU. She joined the Kemper Museum staff in 2009 as curator and was promoted in 2012. O’Brien served as a visiting scholar to the Women’s Studies Research Center at Brandeis University in 2005-06 and won the National Alumni Award for Professional Achievement from Rhode Island School of Design in 2006.

Jenny Curatola, Lansing, is a senior in English, theater and global and international studies. She is the co-founder and artistic director of the Jayhawk Initiative for Student Theatre and the recipient of the 2012-13 Jayhawk Choice Award for New Organization of the Year. Curatola is a 2013-14 Hall Center Scholar and the winner of the Jack and Lavon Creativity Award for her original performance piece, “One Wild and Precious Life.”

Search options »
Subscribe to KU Today
It's #FossilFriday , and there's an app for that. 📱 #KUdiscoveries https://t.co/HdHHdK379m
«»
Follow us on Twitter »
Why KU
Apply »
One of 34 U.S. public institutions in the prestigious Association of American Universities
44 nationally ranked graduate programs.
—U.S. News & World Report
Top 50 nationwide for size of library collection.
—ALA
5th nationwide for service to veterans —"Best for Vets: Colleges," Military Times