LAWRENCE — Occasionally, astronomers find an extraordinary “lensing galaxy” that can enhance light like a telescope from even deeper reaches of universe — brightening and magnifying background galaxies up to 30 times.

Now, an astronomer at the University of Kansas is part of a team that has detected the most-distant-known example of a lensing galaxy — located some 9.5 billion light years away from Earth. Their findings have just been published in Astrophysical Journal Letters. 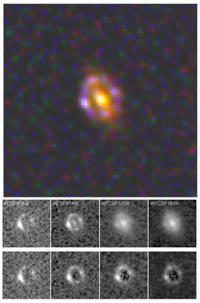 The discovery could herald a new understanding of the way galaxies are born.

Using the Hubble Space Telescope and the Arizona-based Large Binocular Telescope Observatory, Rudnick and a team of scientists headquartered at the Max-Planck Institute in Heidelberg, Germany, have peered through the newfound gravitational lens to see a faraway galaxy forming stars at a “tremendous” rate compared to its mass in stars.

“It turns out that there are a handful of these very distant, small star-forming galaxies that are lensed by galaxies that are closer to us than the lens we have just discovered,” Rudnick said. “If you calculate the probability of this happening, it implies that these intrinsically faint, starbursting galaxies must be extremely numerous, and that they may be important building blocks of present-day galaxies.”

Moreover, the discovery allows insight into the mass and amount of dark matter in the lensing galaxy itself.

“The exact way that the light from the background galaxy is bent tells us about the amount and distribution of mass in the foreground object,” Rudnick said. “So we get an objective way of weighing the foreground object, in this case a galaxy, and seeing how its total mass is distributed — that is, how concentrated it is.”

“Dark matter actually makes up most of the mass in the universe, but we can only infer it from a variety of techniques, of which gravitational lensing is one,” said Rudnick.

The researchers term their discovery a “quadruple lens,” or a lens in which the source is split into four separate images.

“Unlike a simple magnifying glass, the image isn’t just magnified and stretched,” Rudnick said. “Rather, the distribution of matter in the lens can cause strange distortions — in this case actually splitting the image into four components.”

Until the scientists can piece together the parts, the exact nature of the more distant, magnified galaxy remains opaque.

“To ‘de-lens’ the galaxy you need a very precise understanding of the structure of the lens, which is difficult to obtain without further observations,” Rudnick said. “However, other galaxies that are similar to the lensed galaxy but were detected without being magnified by an intervening object, appear to be about a few hundred times less massive and roughly ten times smaller in spatial extent than our own galaxy. Despite their much smaller stature, these galaxies are forming new stars at rates a few times that of the much larger Milky Way. This means that they are very rapidly increasing their mass in stars.”