LAWRENCE — The University of Kansas Wind Ensemble, conducted by Paul Popiel, KU director of bands, released its fifth CD in the Wind Band Classics series, “In the Shadow of No Towers." The release of the CD on the Naxos label continues the KU Wind Ensemble’s extraordinary journey to Carnegie Hall. 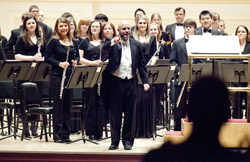 The album was recorded in closed sessions at the Lied Center of Kansas just before the ensemble departed for its historic trip to New York City to perform March 26 in front of a crowd at Carnegie Hall’s Stern Auditorium/Perelman Stage. 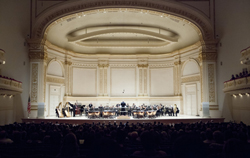 In the Shadow of No Towers: Symphony No. 4 was inspired by discussions between critically acclaimed composer Mohammed Fairouz and Pulitzer Prize-winning graphic novelist Art Spiegelman about the terrorist attacks on the iconic World Trade Center in the city that both artists call home. It begins with that disaster of Sept. 11, 2001 — an event whose effect on New York and the United States is still being measured — and explores the development of a post-9/11 reality, a broader vision for society that is enriched by the creative arts. Each movement takes as its point of departure a graphic detail from Spiegelman’s book.

To help bring Fairouz’s vision to life, the work was commissioned by the nonprofit foundation Reach Out Kansas Inc., which was founded by Overland Park attorney and KU alumnus Jim Zakoura. It was written specifically for the KU Wind Ensemble and Popiel.

"This latest CD from the KU Wind Ensemble represents the culmination of two years of collaboration with composer Mohammed Fairouz, as well as many months of rehearsal and hard work from our music students,” said Popiel. “The level of playing on this CD is quite exceptional. We are extraordinarily proud of these students. I believe this is certainly the finest disc we have ever put together, and we are thrilled to share it on the Naxos label with this international release."

The release of the CD “In the Shadow of No Towers” continues the special connection between KU and the Naxos record label. Wind Band Classics' founder, Randall Foster, KU alumnus and son of Robert E. Foster, former KU director of bands (1971-2002) and current KU professor of music education and music therapy, launched the Wind Band Classics series in 2006 with the release of the Wind Ensemble’s first CD, “Redline Tango.” Since the inception of the series, the only one of its kind with a major classical music label, Naxos has released a total of 45 CDs.

The CD is available at KU Bookstore, Love Garden Sounds and online at Amazon and iTunes.

For additional information, contact the KU School of Music at 785-864-3436 or visit www.music.ku.edu.