LAWRENCE — The widespread distribution of insects across all ecological niches on Earth is due in large part to the amazing properties of their exoskeletons. Lightweight, waterproof and durable, exoskeletons are made of “cuticle” — the second-most common biological composite material found anywhere in nature, after cellulosic materials.

Now, a researcher at the University of Kansas is studying the makeup of cuticle and hopes to engineer versions of the material to improve human health care.

“I somewhat facetiously describe the project as trying to answer the question, ‘Why do some bugs go “squish” when you step on them, but others go “crunch” even though they're made out of the same material?’” said Stevin Gehrke, professor of chemical engineering at KU.  “Cuticle is made of three basic materials — protein, chitin, which is a polysaccharide, sort of like an animal version of cellulose, and water-insoluble pigments similar to and including melanin, the same material that is involved in tanning of our skin.” 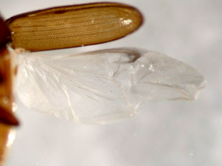 The National Science Foundation recently provided Gehrke with a third grant to continue his study of cuticle in collaboration with Mike Kanost of Kansas State University, joined by Prajna Dhar of KU's Department of Chemical & Petroleum Engineering on this new grant. Over the past 10 years, these grants have totaled $2.5 million.

Gehrke’s expertise centers on hydrogels — water-swollen polymeric materials used in contact lenses, drug tablets, foods like Jell-O, and absorbent products like diapers. Because of this, he has helped sort out a controversy in biology about whether components in cuticle were chemically crosslinked together or not.

“Crosslinking” refers to bonds that link together polymer chains, resulting in differences in flexibility, hardness and strength of material.

“Increased crosslinking in hard cuticle was postulated by our K-State collaborators to be responsible for its being harder than soft cuticle,” said Gehrke. “However, soft cuticle also usually has more water in it, and most things get softer when they absorb water. So others in the field argued that soft cuticle was soft simply because of higher water content and not because of the crosslinking. The standard test for this is called ‘dynamic mechanical analysis,’ or simply DMA. This test uses an instrument which grips a sample and pulls on it at different speeds. If you pull slowly on an uncrosslinked polymer like plastic, the molecules can disentangle and flow. But if it’s crosslinked, the molecules can’t disentangle and the sample will eventually break.”

By testing wing covers on the backs of beetles, called “elytra,” Gehrke and his collaborators showed that cuticle is lightly crosslinked when immature and soft, but as an insect matures and its shell gets harder, it is in fact getting more crosslinked, while simultaneously losing water.

Gehrke’s latest grant enables him to study crosslinking chemistries and other interactions of the insect cuticle proteins, chitin and pigments in solution rather than in an insect. His team believes that one of the proteins may wrap around the chitin fibers while another crosslinks to the pigments and the protein-wrapped chitin fibers, acting like a glue.

With a better understanding of the structure of cuticle, Gehrke and his partners hope to contribute to next-generation biomaterials that could greatly improve health outcomes and quality-of-life for people suffering from a host of diseases and injuries.

“It may sound odd to think that insect proteins could be useful in medical applications, but silk from silkworms has been used for centuries,” Gehrke said. “We believe we can come up with new materials and material concepts for designing biomedical implantable materials like cartilage replacements. In fact, we’ve been inspired by our cuticle studies to develop such multicomponent materials for tissue regeneration, and this has led to a patent and a National Institutes of Health grant with Michael Detamore at KU.”

Furthermore, Gehrke and his colleagues have teamed with KU mechanical engineering researchers Paulette Spencer and Candan Tamerler to propose to the NSF using knowledge gained from the study of insects to develop new biomedical materials. The researchers also are pursuing funding to study a protein in insects’ joints, as it appears to be one of the most highly elastic materials in the sense of very high-energy recovery.

“If you made a ball from it and dropped it, the ball would bounce back almost all the way back to your hand,” said Gehrke.

In 2019, Tera Fazzino and @kulifespan colleagues identified criteria that may qualify food as hyper-palatable. New… https://t.co/N5kGzzzxD7
«»
Follow us on Twitter »
Why KU
Apply »
One of 34 U.S. public institutions in the prestigious Association of American Universities
44 nationally ranked graduate programs.
—U.S. News & World Report
Top 50 nationwide for size of library collection.
—ALA
5th nationwide for service to veterans —"Best for Vets: Colleges," Military Times