LAWRENCE — It’s unlikely that another human being has such a long, vital and multifaceted relationship with the Hubble Space Telescope as does former NASA astronaut Steven Hawley, who today serves as a professor of physics and astronomy at the University of Kansas. 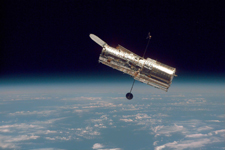 In the 1990s, Hawley served on two HST-related Space Shuttle missions: As a crewmember of STS-31 in 1990, he put the space telescope into orbit. On his second mission, STS-82 in 1997, he installed two new scientific instruments — STIS and NICMOS — and replaced a few failed components.

“Both missions had challenges, but each was successful,” said Hawley. “I’m very proud of my work on HST and how HST has been so revolutionary for astronomy. It’s arguably the single greatest scientific instrument ever developed. I think that will be a major part of its legacy, along with discoveries that HST enabled.”

Hawley said that chief among these was establishing the age of our universe and the fact that the expansion of the universe is accelerating; the Hubble Deep Field photograph that showed the universe was filled with galaxies; new understandings of how galaxies evolve; and the surprising finding that many or most galaxies have supermassive black holes at their centers.

But Hawley is more than an ex-astronaut content to reflect with satisfaction on the successes of his NASA work. He’s an active astronomer, who today is using the telescope he once deployed and serviced to research an abnormal planetary nebula he discovered as a young astronomer, before ever venturing beyond Earth.

“I investigated Tololo 26 initially in the late 1970s and wrote a paper about it in 1981,” said the KU researcher. “It was identified as a planetary nebula on a survey of the southern sky, but the information about it at the time indicated that it was unusual, so I decided to look into it in more detail. When I took a good spectrum of it I realized that it had a very abnormal spectrum for a planetary nebula.”

Hawley said that such planetary nebulae represent the last phases of dying stars. When a star like the Sun dies, normally it first becomes a red giant, and then it loses its atmosphere, leaving behind a white dwarf star — which is the remnant core of the star — and a surrounding cloud of gas that used to be the star’s outer layers. The white dwarf is so hot that it causes the surrounding gas to glow. Ordinarily, the gas dissipates over time leaving behind just the white dwarf star.

“The analysis that I published in 1981 showed that the object wasn’t a typical planetary nebula because the density was much higher and the emission-line ratios were weird,” said Hawley. “In fact, so far as I know, it’s still the case that it has the highest density of photoionized hydrogen of any object known. Also, there was insufficient mass producing the spectrum for it to be a normal planetary nebula. I left the issue unresolved, but proposed that the object might show changes in its spectrum over ‘observationally interesting timescales,’ by which I meant my career.”

After his time at NASA, Hawley returned to his alma mater in Lawrence, Kan., and again took up his research interest in Tololo 26. His prediction that the spectrum would change was confirmed from ground-based observations Hawley obtained in 2011. Subsequently, he heard about another astronomer, Howard Bond of Pennsylvania State University, who had used the Hubble Space Telescope to study a comparable object, called “EGB 6.”

“We got together and discovered that our two objects were in many ways similar,” Hawley said. “EGB 6 was shown to be actually two stars, and our idea is that Tololo 26 is two stars as well. Furthermore, we think that the one star lost mass —perhaps in becoming a planetary nebula — and that a small amount of the total mass lost ended up in a ring around the companion star. What we’re observing then is the spectrum of the ring around the companion star, not from the planetary nebula, which would explain why the spectrum is ‘weird.'”

After he, Bond and collaborators wrote a successful grant proposal, today Hawley again is working with the HST, but this time as a researcher.

“HST is uniquely capable of telling us if this is the right picture because potentially it has enough resolving power to show two objects at the location of Tololo 26, if that’s the actual situation,” he said. “It should also be able to tell us which star is the source of the spectrum we’re observing using ground-based telescopes. HST’s ability to observe in ultraviolet wavelengths, which is not possible from the ground, will allow us to understand more about the hot star that must be present. Our other observations are consistent with there being both a hot star and a cooler star, but we haven’t yet proven that there are two objects, nor where the emission lines are coming from. That’s what we hope to find in the HST observations.”

The space telescope’s images of EGB 6 thus far have confirmed what the astronomers already knew — that it’s two objects. The new images are also helping the investigators to understand where the light of different wavelengths is originating. Now, they’re eagerly awaiting the images of Tololo 26, expected in February, to see whether it’s two objects as well and where the different features of its spectrum are being produced.

In the meantime, Hawley can reflect a bit that his career has come full circle.

“When I was working on HST I probably dreamed about using it one day for my own research, but I didn’t really think I would have an opportunity,” he said. “I feel blessed that there has been this symmetry in my professional careers as an astronomer and as an astronaut.”