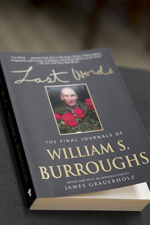 James Grauerholz, executor of Burroughs’ estate, Lawrence resident and KU alumnus, has donated the author’s final personal journals, type scripts and editing materials to the Kenneth Spencer Research Library. The materials were the source for “Last Words: The Final Journals of William S. Burroughs,” published in 2000, which Grauerholz edited.

Grauerholz had multiple reasons for donating the journals to KU.

“William spent his last years, wrote his last books, painted his (first and) last paintings and jotted-down his last words in Lawrence, Kansas,” Grauerholz said. “So the city of Lawrence, and the University of Kansas, which is the heart of our community, deserve to have the last word on Burroughs’ life and works.”

Burroughs, the often-controversial author, is perhaps best known as the author of “Naked Lunch” and numerous other novels, including “Junkie," “Nova Express," the Cut-Up Trilogy and “Cities of The Red Night.” His work was highly influential on both American and international literature, and he was once described by Norman Mailer as "the only American novelist living today who may conceivably be possessed by genius." His work and influence were recognized professionally as well. He was inducted into the American Academy and Institute of Arts and Letters and received numerous other professional honors. 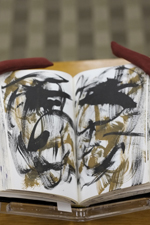 Burroughs lived in Lawrence from 1982 until his death in 1997. While they were his final years, they were far from retirement. In fact, they were among his most productive, in which he wrote his final seven major books, created hundreds of artworks and worked on several multimedia projects, including “The Black Rider” and avant-garde opera with Tom Waits and Robert Wilson, audio and music recordings with U2, REM, Laurie Anderson and others; as well as film projects with directors such as Gus Van Sant and Howard Brookner.

The donation of materials marking the end of Burroughs’ life coincides with the centenary of his birth, Feb. 5, 1914. He was associated with many cities around the world, including New York, Mexico City, Paris, London and Tangier, Morocco. But the fact that his Lawrence years were among his most creative and important led Grauerholz to donate the 10 journals, type script and editing materials to KU Libraries. Several of the journals will be on display in the library throughout February.

“This is long overdue for the Burroughs estate to work with the Kenneth Spencer Research Library,” said Grauerholz, who attended KU from 1969 to 1973 and taught American studies in the 2000s. “I’m grateful the university will be able to make these materials available to the community of scholars, here and worldwide. Now anyone with a good reason to read them will be able to.”

The donations will add the libraries’ already noteworthy holdings of Burroughs materials. Among the materials are contributions to periodicals and first editions of many of his works, including “Naked Lunch,” and a manuscript collection containing materials from the 1950s and '60s, including letters by Burroughs as well as letters written to him by Allen Ginsberg, Gregory Corso, publishers and others. There are also several short typescripts and “cut-ups” by Burroughs, written for Jeff Nuttall’s My Own Mag and others by writer and artist Claude Pelieu. The collections also include audio recordings of Burroughs made in the early 1960s purchased from Melville Hardiment at that time, including Burroughs speaking on “A Day in the Life of a Junkie.”

The materials will be cataloged and made available upon request to inquirers who wish to read or study them. Elspeth Healey, special collections librarian, said the donation will be of great scholastic and cultural value for a broad population.

“Research in the humanities depends on access to writers' papers and other primary sources. Burroughs' last journals will open up new avenues of scholarship for this significant cultural figure and shine a light on the Lawrence chapter of his life and creative output,” Healey said. “We are pleased that the University of Kansas will be able to make these unique artifacts available to students, scholars and the public.”