LAWRENCE — You could consider this University of Kansas multidisciplinary research team the modern day “Monuments Men (and Women).” 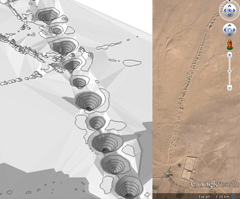 Instead of George Clooney leading a band of scholars behind enemy lines into Nazi Germany to save artistic masterpieces, this group of academics for months pored over satellite images and has created what is believed to be the first complete map of karez water systems in southern Afghanistan.

The systems for centuries in the Middle East and Central Asia have steered runoff water from the mountains so that villages can use it as drinking and irrigation.

“It’s like the ribbon of life, really,” said Rolfe Mandel, professor of anthropology and senior scientist at the Kansas Geological Survey. “All that water from high elevations is being funneled down to the villages and agricultural fields.”

The maps will aid both the U.S. military when it departs Afghanistan and groups dedicated to preserving the water systems that have become endangered in Afghanistan. The U.S. Army Research Office in 2010 funded the KU multidisciplinary team’s study to help research karez systems and promote their preservation and cultural relevance and avert potential damage to systems.

“What we’re trying to do is provide information that helps the Army to avoid activities that might result in more conflict and instead to be sensitive in supporting and proactive in creating a situation of peace, which is better for everyone,” said John Hoopes, professor of anthropology.

Communities in the Middle East and Central Asia for thousands of years have used the hand-dug systems of underground tunnels and canals, but most of the karez (pronounced kah-res) systems in Afghanistan are no longer active due to multiple factors, such as drought, the usage of modern well technology, and the effects of the ongoing conflict there.

In addition to Mandel and Hoopes, the KU team that had a hand in the anthropological and archaeological research in Afghanistan included Phil Stinson, associate professor of classics; and graduate students Antoinette Egitto in anthropology, Anna Wieser of the Kansas Geological Survey and Matt Naglak, Andrea Samz-Pustol and Jamie Jackson in classics. Funded by the same grant, KU researchers in the departments of Geology and Geography are also working in the areas of karez water science and other subjects.

Hoopes said for the anthropological research the group used both Google Earth and higher-resolution satellite images from the Army to identify more than 100 visual features in Afghanistan that may correspond to ancient archaeological sites. The hope is that the Afghanistan security situation will stabilize so the sites can be examined.

“We won’t know that until someone can go check them out on the ground, but we were able to recognize things in the categories of walls, mounds and very distinctive structures,” Hoopes said.

As for the karez systems, the team hopes the research will shed light on a myriad of water issues both in Afghanistan and around the world. The group was able to create a map of about 6,000 karez systems in southern Afghanistan – an area about the size of Kansas. They also coded the map to note which systems where still active and ones that were not.

The satellite images reveal active systems that have large holes in the ground for access shafts above the underground canal, or karez channel, leading toward agricultural plots, villages and even some more densely populated areas. However, in the inactive ones the holes are filled in because no one has maintained them.

A majority of the approximately 6,000 karez systems the group mapped are inactive.

A concentration of the ones still in use are in the Helmand and Kandahar provinces where the pastoral way of life is active and well, he said. Mandel said several factors have led to the hundreds of other karez systems becoming inactive. For example, many  younger generations have fled rural areas for other economic opportunities and to flee war-torn areas, so there are less people around who can help maintain the kazez systems. Debris falls through the access shafts and will diminish water flowing through the karez tunnel if they aren’t maintained.

Also, as more modern wells have been dug, they’ve changed the landscape, but also brought in social changes. Instead of village elders controlling the water and allocating it, the owner of a well controls who can use the water.

In addition to the Army, the research team plans to share findings with a leading hydrologist in Afghanistan, plus other groups that provide aid to communities in the region.

“If you can see where things have been, you can see where it’s going in terms of projecting how quickly these systems are being abandoned,” Mandel said. “It has a lot of social and economic implications. The rate of change through time is important.”

“It’s a gravity-driven system. The Earth has an unlimited supply of gravity,” Hoopes said. “A gravity-based system for obtaining and moving water doesn’t require fuel, doesn’t require electricity, doesn’t require any type of modern energy, which is costly. It’s an appropriate technology that operates on the basis of human knowledge and labor. But it’s not something that sets up new relationships of dependency or the purchase of oil or electricity or other sources of power.”

Egitto, who conducted her dissertation as part of the research, said there are major questions about whether the use of deep well technology would be sustainable, especially once American military forces and companies leave Afghanistan, because there could be difficulty in repairing parts for the wells or supplying fuel to the region.

Hoopes said the project has shed a light on the importance of traditional solutions, sustainability and how technology can introduce complications into society.

KU in the news
Wired — Wed, 07/21/2021
Burnout is a good thing
Science — Thu, 07/15/2021
Exploding stars may have assaulted ancient Earth
Listen to @RadioDana speak with @UnivOfKansas scholar Nicole Perry about her book "Policing Sex in the Sunflower St… https://t.co/hreP8AcPgC
«»
Follow us on Twitter »
Why KU
Apply »
One of 34 U.S. public institutions in the prestigious Association of American Universities
44 nationally ranked graduate programs.
—U.S. News & World Report
Top 50 nationwide for size of library collection.
—ALA
5th nationwide for service to veterans —"Best for Vets: Colleges," Military Times