LAWRENCE — As anyone who has attended Kansas public schools can attest, the Western Meadowlark is the state bird, and the Wild Native Sunflower is its official state flower. Now they can add two signature Kansas fossil animals to the list of exemplary animals and plants that represent the state – one, an extinct reptile that swam the oceans that covered Kansas 85 million years ago, and one that soared the skies above the ocean. 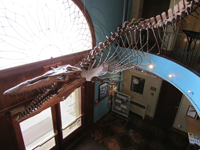 Geological deposits in Kansas provide among the most complete, fossilized skeletons of both Tylosaurus and Pteranodon, both found at the KU Natural History Museum, the Fort Hays State University Sternberg Museum of Natural History, and other major museums nationally and internationally.

“What dinosaurs are to Wyoming and Montana, mosasaurs and pterosaurs are to Kansas,” said Leonard Krishtalka, director of the KU Biodiversity Institute and Natural History Museum. “For scientists and the public at large, Tylosaurus and Pteranodon represent Kansas science and paleontology worldwide better than any other fossil animal.” 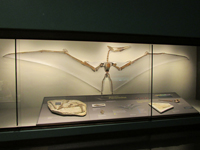 Reese Barrick, director of the Sternberg museum, said that the law was important recognition of the state’s fossil heritage and that many of the state’s spectacular fossils are exhibited in museums around the world.

Although Tylosaurus and Pteranodon lived at the same time as the dinosaurs, neither of these extinct animals are dinosaurs.

Tylosaurus was a giant predatory lizard-like denizen of the sea that grew to lengths of about 45 feet and was the top predator of the oceans of that time. Although Tylosaurus is now known from many other places around the world, the most complete specimens have been recovered from the chalk beds in western Kansas that were deposited by the ancient ocean.

Pteranodon is a genus of extinct, giant flying reptile called pterosaurs that lived on the cliffs and coastal areas beside the oceans covering Kansas during the Late Cretaceous, and fed on fish and other marine life.

For those looking for examples of these fossils in Lawrence, the KU Natural History Museum’s lobby features one of the largest mosasaurs ever found, a Tylosaurus excavated near Scott City.  On the third floor of the museum, the newly renovated Pteranodon exhibit reveals the full wingspan of the animal.

In Hays, the Sternberg museum features both the type specimen of Pteranodon sternbergi and a complete Tylosaurus collected and mounted by George Sternberg in its Cretaceous fossil gallery.  Life-sized models of these Creatures are also prominent in their Cretaceous dioramas.