LAWRENCE — The Broadway composer who turned the story of the “Wizard of Oz” on its head in the megahit musical “Wicked” is the focus of a new book from a University of Kansas professor.

Drawing on rich source material and interviews to examine a career that is bookended by two Broadway smashes, Paul Laird, a professor of musicology, recently published “The Musical Theater of Stephen Schwartz: From ‘Godspell’ to ‘Wicked’ and Beyond.”

Schwartz is perhaps best known as the composer behind “Wicked,” the most popular Broadway show of the 21st century. But to Laird, Schwartz’s greatest historical importance in the genre was in the 1970s with the introduction of popular music into the earlier successes of “Godspell,” “Pippin” and “The Magic Show."

“I think as long as anyone cares about American musical theater, they are going to care about Schwartz’s work. He is without a doubt one of the first composers to successfully incorporate popular music into his shows,” Laird said. 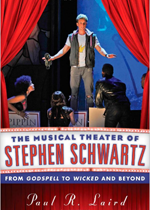 Laird first met Schwartz in 2004 when he was invited to Columbus, Ohio, to give a presentation on Leonard Bernstein’s “Mass.” Among those in attendance was Schwartz, who had written the English lyrics to “Mass.”

“I knew he was either going to hate the presentation, or maybe I would make a contact,” Laird said. “Well, it turns out he thought I had some interesting things to say, and I made a contact.”

From there, Laird interviewed Schwartz about his role in “Mass" then “Wicked,” and eventually was granted permission to do a book on all of his work.

Given remarkable access to Schwartz’s files, Laird was allowed to study full orchestral scores and scripts pulled from filing cabinets and boxes in Schwartz’s office.

“I had more materials than I knew what to do with,” Laird said.

So much so that he decided to publish a book solely based on the source material he collected from “Wicked.” That book, “Wicked: A Musical Biography,” came out in 2011.

Laird’s current book dedicates a chapter to each of Schwartz’s major works, animated features for Disney and DreamWorks and his smaller works outside of Broadway and Hollywood.

A common theme that Laird found in Schwartz’s career was his willingness to continue working on shows that weren’t originally successful.

“The history of Broadway is littered with shows that people work very hard on, nobody comes to, and then close and are forgotten,” Laird said. “But Schwartz has almost never been able to let a show die. If it is not successful in its original version, he’ll keep working on it with collaborators until he gets it to the place where people are interested in licensing it for performance.”

Sometimes the revisions go on for decades, such as "The Baker’s Wife,” which Schwartz worked on from 1976 to 2005. Laird also points to “Children of Eden,” which ran in London in the early 1990s but never made it to Broadway. Collaborating with John Caird, who worked on “Les Misérables,” Schwartz labored over “Children of Eden” for years. It is now one of the most frequently rented shows and performed in community theaters, churches and schools around the world.

“There is real creative tenacity there,” Laird said. “You just don’t find that very often.”

Laird’s book is available on Amazon or from publisher Rowman & Littlefield.