LAWRENCE — Scientists in the field have collected voucher specimens since the 19th century. Today, most sit in research institutions around the world “dried, mounted, pickled, preserved, frozen and stuffed,” according to the creators of Lifemapper, an online species-distribution tool created at the University of Kansas.

Most specimens in natural history museums come with a label describing, among other things, where in the world it was collected. But where might these species migrate in the future in order to survive extreme weather, shifting seasons, invasive species, rising oceans and other threats linked to rapid climate change? 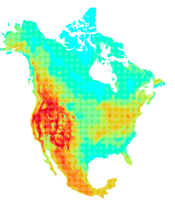 “Climate change is the most pressing problem of the 21st century, and Lifemapper provides tools to explore how climate change can impact individual species ranges as well as the species composition of communities,” said James Beach, assistant director for informatics with the Biodiversity Institute at KU. “Since human life and quality of life is dependent on the functions and services of ecosystems and natural communities, seeing how thousands and tens of thousands of species are being impacted by changing climate should be of interest to anyone interested in future generations' quality of life on planet Earth for future generations.”

To generate predictions, Lifemapper performs “species distribution modeling” based on records of where organisms have been spotted and collected, along with environmental layers such as elevation, precipitation and temperature. Then Lifemapper determines the preferred conditions for a species — and where those conditions are most likely to be found in the future under various climate settings.

“Lifemapper has an agreement with the Global Biodiversity Information Facility to use the species data they aggregate from natural history museums and collections worldwide,” said Aimee Stewart, who serves as lead software engineer on the project. “Lifemapper uses elevation and current climate data calculated from observation stations by the Worldclim project for modeling GBIF species data. For projected future climate scenarios, we use climate data predicted for the International Panel on Climate Change Assessment Reports.”

In development since the early 2000s, Lifemapper today can help individual researchers anywhere in the world who lack the computing power needed to estimate the future distribution of plants and animals.

“The time and computational resources needed to perform calculations on hundreds or thousands of species can be prohibitive for an individual researcher on even a powerful desktop computer,” Stewart said. “Researchers can submit their own species and environmental data with the Lifemapper plugin to the GIS package QGIS for single or multi-species analyses with online Lifemapper tools. Lifemapper distributes these requests to one or more high performance computing environments running Lifemapper software, including the Advanced Computing Facility here at KU, where a divide-and-conquer approach allows computations to complete far more quickly than is possible on a single machine.”

“More advanced students might use the simplest species prediction tools available through the website or download data for further geospatial analysis,” said Stewart. “The ChangeThinking project, a collaboration with the University of Michigan School of Education and their Animal Diversity Web Project, created curricula and an online workbook using Lifemapper web services to teach middle and high school students about the effects of climate change. In 2014, ChangeThinking curricula were used in 130 schools in Michigan, Kansas and other states.”

Most of Lifemapper’s funding has been collaborative, as the project partners with experts in the fields of biology, macroecology, cyberinfrastructure, computer science and education. Additionally, the National Science Foundation and NASA have provided most of the support for Lifemapper.

“As part of a partnership with UTEP’s Cyber-ShARE Center of Excellence, we have been encouraged to seek support to connect and integrate Lifemapper’s models and computational services to other earth-science modeling systems with metadata and computer semantics,” Stewart said.

“As part of PRAGMA, we are working with UCSD’s San Diego Supercomputer Center and UF’s Advanced Computing and Information Systems Laboratory to further modularize our systems and speed our data computation, storage and retrieval systems,” Stewart said.

With an NSF award recently recommended for funding, the Lifemapper team hopes to further refine its ability to predict shifting habitats to supply scientists and conservationists with the best data to protect species around the world.

“Tools created as part of the new grant will allow further analyses of landscapes, identifying habitat fragmentation and how it can change over time with climate change, providing managers with the ability to pinpoint areas most at risk,” Stewart said.