LAWRENCE — A study recently published in the journal Carcinogenesis by researchers at the University of Kansas shows a new role for the protein adenomatous polyposis coli (APC) in suppressing colorectal cancer — the second-leading cause of cancer-related deaths in the U.S.

Lead author Kristi Neufeld, associate professor in the Department of Molecular Biosciences and co-leader of the Cancer Biology program at the KU Cancer Center, has spent the better part of her career trying to understand the various activities of APC, a protein whose functional loss is thought to initiate roughly 80 percent of all colon polyps, a precursor to colon cancer. Neufeld, along with her postdoctoral fellow Maged Zeineldin, undergraduate student Mathew Miller and veterinary pathologist Ruth Sullivan, now reports that APC found in a particular subcellular compartment, the nucleus, protects from inflammation as well as tumor development associated with chronic colitis.

Whether APC reaches the nucleus may well affect the ability of intestinal stem cells to produce differentiated cells with specialized functions, Neufeld said. 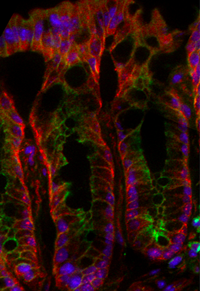 “It’s not widely appreciated, but there is still plenty of cell growth going on in adults, with the colon being a good example,” she said. “On average, we shed and replace about 70 pounds of intestinal tissue annually, so you can imagine that this process requires exquisite control to prevent tumor formation.”

Regular renewal of the colon lining occurs through stem cells that are capable of constantly dividing. These cells produce descendants that take up specific roles: By secreting mucin, for instance, goblet cells generate a mucus layer that serves as the colon’s physical barrier against its many microbial tenants. But if APC can’t find its way to the nucleus, Neufeld and her team have noted far fewer goblet cells as one outcome.

“We introduced a specific APC mutation into mice that took away the nuclear zip code, so to speak, leaving APC stuck in the cytoplasm,” Neufeld said. The researchers studied this mouse model under conditions that induce ulcerative colitis, a form of inflammatory bowel disease that can be a prelude to colon cancer.

Observing significantly more colon tumors in these mice compared to those with normal APC in the same disease setting, they hypothesized that functional nuclear APC might somehow guard against inflammation and its downstream effects, including tumor development. Now, Neufeld thinks she and her team may have a clue as to how this happens.

“The drop in goblet cell numbers we observed was striking,” she said. “We then examined one of the proteins found in mucus, called Muc2, and found that its RNA levels were greatly decreased. If there are fewer goblet cells as a result of APC being unable to reach the nucleus, there will also be less mucus, which could increase the colon’s sensitivity to bacteria and other microorganisms in the gut that are capable of promoting inflammation.”

Neufeld said while there are still no quick fixes for mutant genes, perhaps tools could be developed to synthetically replace this less-than-ideally thick mucus layer in affected people.

One known function of APC is that it halts cell proliferation: by muzzling the canonical arm of the Wnt signaling pathway, which otherwise instructs cells to go forth and multiply. Neufeld and her group have already shown, using the same mouse model, that APC stationed in the nucleus is necessary to suppress Wnt and its signaling partners — particularly β-catenin, a key target of normal APC. With a role for nuclear APC in controlling goblet cell differentiation now supported, the researchers are probing possible mechanisms to learn if and how Wnt pathway members might be involved.

“Rather than being a simple, single-function protein, APC is more like a complex set of moving parts, each doing something different and most still poorly understood,” Neufeld said. “I think if the sole purpose of this protein was to target β-catenin for destruction, it wouldn’t need to be this large. Our next job is to figure out exactly how goblet cell differentiation is controlled by one or more of APC’s many components.”

Beyond a slew of mechanistic details, the bigger picture that Neufeld and her group will keep exploring is that some colon cancers could arise from an inflammatory response to bacterial penetration of a thinner-than-normal mucus layer in the gut, resulting from defective APC. The possibilities of just what APC does and doesn’t do, and how to compensate for any intestinal glitches related to loss of APC function, present a challenging mystery but also a plentiful harvest for scientists like Neufeld to reap going forward.

The National Institutes of Health supported this research.

This news release is based on a story by Alissa Poh that originally appeared at www.kucancercenter.org.

KU in the news
PolitiFact — Thu, 05/19/2022
The US government is not creating food shortages, despite claim about buffalo killed in the 1800s
BBC — Wed, 05/18/2022
The endurance of Japan's simple street snack
For a piece on the importance — and fragility — of friendships, @amandajhooton cites 2018 findings by @KUCollege co… https://t.co/Zt5tQxXWju
«»
Follow us on Twitter »
Why KU
Apply »
One of 34 U.S. public institutions in the prestigious Association of American Universities
44 nationally ranked graduate programs.
—U.S. News & World Report
Top 50 nationwide for size of library collection.
—ALA
5th nationwide for service to veterans —"Best for Vets: Colleges," Military Times