LAWRENCE — The lesser prairie chicken, a symbol of the prairie’s history and seasonal rhythms, also has become, in more recent years, the focus of controversy. But a new plan encourages voluntary industry cooperation with efforts to conserve the habitat of this federally threatened species — while providing capability to move forward with development. 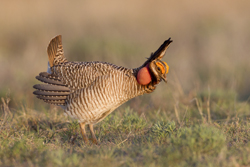 The Kansas Biological Survey, a University of Kansas research unit, will provide the central GIS and database support for the effort, tracking locations and costs of projects affecting habitat as well as conservation projects. The work will be done through a five-year, $2.1 million contract with WAFWA to serve as the GIS center for the plan.

Mike Houts, research associate with the Kansas Biological Survey, is information system director of the center.

“The lesser prairie chicken is sensitive to disturbed habitats, so its presence can be considered an indicator of intact shortgrass and shrubland habitats in the southern Great Plains,” he said. “The range-wide plan is set up with a mitigation cost structure that encourages in-field development, or clustering of projects, to minimize new impacts.”

Examples of project clustering would be to set several wells in a smaller area rather than spreading them out, or siting them near roads, transmission lines or other existing infrastructure that already has affected habitat. When effects do occur, the mitigation fees associated with them are used to pay landowners to create or maintain lesser prairie chicken habitat in areas not affected by development.

The range-wide plan also establishes conservation measures for industry. These include discouraging drilling of new wells during breeding season if chickens are known to be in the area, limiting noise levels on new pumps and generators, putting flags on new fences and burying new electrical distribution lines in prairie chicken areas.

The lesser prairie chicken was listed as threatened through the Endangered Species Act in May 2014. Once a species is threatened, activity that can harm or harass it or its habitat is in violation of the act. But a clause in the act lists exceptions through the “4D rule.” The effects of companies that enroll in the range-wide plan pay the associated mitigation fees and follow recommended conservation measures will be allowed as exceptions, and the companies are protected from the risk of penalties for violation of the act.

Fees are based on effect and habitat value. They support habitat conservation projects such as tree removal, native grass plantings and livestock grazing plans.

“The plan is a win-win compromise where industry has an avenue to continue development — as opposed to being in potential violation of the Act — and landowners are paid to improve and manage habitat on their property,” Houts said.

Houts said that because the bird’s population fluctuates so dramatically, the range-wide plan requires a 10-year average above a certain threshold before it recommends the species be delisted through the Endangered Species Act.

Populations fluctuate in response to environmental conditions. During the recent drought period, there was a great decline, Houts said, with a decrease of about 50 percent from about 35,000 birds in 2012 to about 19,000 in 2013. Rains in the fall 2013 resulted in an increase of about 25 percent, and 2014 rains are expected to produce an even larger increase in 2015. The 10-year recovery goal is 67,000 birds.

Since the species was listed in May as threatened, the range-wide plan has enrolled more than 10 million acres in the plan and collected more than $27 million that is being used to establish a long-term endowment to pay private landowners for habitat conservation. An online map viewer created by the Kansas Biological Survey that depicts the range and management zones for the Lesser Prairie Chicken Range-wide Plan is online.

The Kansas Biological Survey was established at KU in 1911.