LAWRENCE – The historical events depicted in the award-winning film “Selma” and other civil rights milestones marking 50th anniversaries over the next few years continue to garner media attention. In a book released this month, a University of Kansas professor argues that while celebrating the civil rights victories of the 1960s is appropriate, the era’s legacy weighs too heavily in framing today’s racial issues.

Clarence Lang, associate professor of African and African-American studies, said the mythology created around the civil rights struggle of the 1960s has hampered society’s ability to look at present-day economic, social and political trends when analyzing current events such as the protests in Ferguson.

“We have gotten to the point where the '60s have done more than inform how we think about political, cultural and social challenges today. It can actually undercut our political imagination and analysis,” Lang said.

In his book “Black America in the Shadow of the Sixties: Notes on the Civil Rights Movement, Neoliberalism, and Politics,” Lang argues that the legacy of the 1960s has hindered how present-day challenges of dismal social and economic conditions in contemporary black America are viewed. 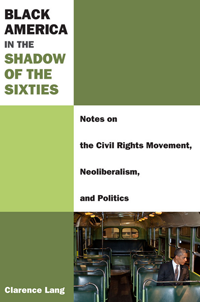 Lang points to the 2012 shooting of unarmed black teenager Trayvon Martin by George Zimmerman in Sanford, Florida. Part of the public outcry in the case linked Martin’s death to the 1955 murder of Emmett Till, an African-American teenager from Chicago who was brutally killed while visiting family in Mississippi.

But Lang attests that Martin’s death, and the deaths of other unarmed African-American men such as Michael Brown in Ferguson, Missouri, and Eric Garner in Staten Island, New York, reflect decades of mass incarceration, which has led to the criminalization of African-American communities and youth.

“We don’t have to go back to the 1960s to make sense of what happened in Sanford, Florida. It is not about Bull Connor in Birmingham or people who represent an older form of racism. We have a current context that allows us to understand how Trayvon Martin was killed and George Zimmerman was acquitted. And that is the context in which Michael Brown and Eric Garner were killed,” Lang said.

Not only does the framework in how society views racial issues need to move beyond the 1960s, but Lang argues that activists need to change how they respond to social injustice.

During the '60s, it was common for protesters to actively seek arrests to test and strain a community’s ability to jail them. That strategy isn’t optimal when the prison population has grown from 300,000 to more than 2.3 million in the past 30 years and holds a disproportionate number of African-Americans, Lang said.

“We have a lot of young black men and women who have records, who are on parole. So the kind of risks you run into being politically active are very different. And, that has to be part of our analysis in deciding how to organize and fight,” Lang said.

In Ferguson, Lang said, he saw protesters begin to move away from some of the conventions that for decades have been linked to 1960s activism, such as the notion that to have a legitimate protest, African-American clergy must be involved.

“The issues are not the same as they were in the 1960s; therefore, neither can the response be the same,” Lang said. “I think all of us engaged in ideas of social justice need to think about how that looks in light of conditions we actually face and not based on a narrative we have dragged with us for 40 years.”