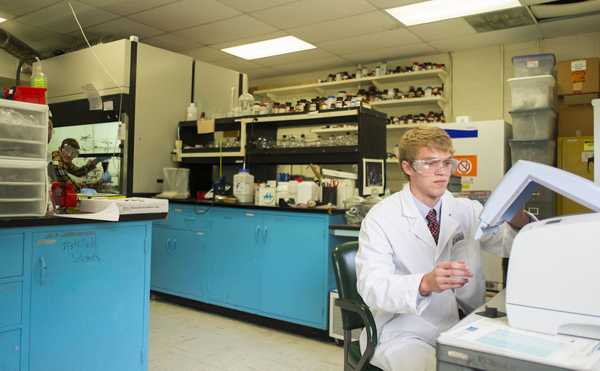 LAWRENCE — How do you follow up on being named the 56th Goldwater Scholar at the University of Kansas?

If you’re Ryan Limbocker, senior from Overland Park, you keep accelerating toward your goal of finding the origins of diseases such as Huntington’s and Alzheimer’s. Limbocker’s research will receive a rocket-powered boost from his latest honor — today, he was named a Gates Cambridge Scholar, one of only 40 U.S. collegians to be awarded the prestigious scholarship.

“One of the primary purposes of the Gates Cambridge Scholarship is to create a network of intellectuals committed to improving the lives of others, so I see this opportunity as a privilege and responsibility to use my passion and curiosity for studying neurodegeneration to make a difference,” said Limbocker. “I see neurodegenerative disease as one of the most widespread and dreadful ailments of the human body. This is a challenging field that I enjoy studying and am very intrinsically motivated to advance with the goal of trying to help the millions of people who will be impacted by illnesses like Alzheimer's disease.”

Limbocker has previously corresponded with Christopher Dobson, the John Humphrey Plummer Professor of Chemical and Structural Biology at the University of Cambridge, on Dobson’s research to gain a knowledge of protein function in neurodegenerative disease. Limbocker wrote in his application of his deep desire to work “alongside the pioneers of research in Professor Dobson’s lab.” After graduating from KU in May, he’ll get that opportunity.

“The Gates Cambridge Scholarship is one of the most competitive awards for undergraduate students, and it speaks volumes for Ryan and for his faculty mentors Michael Johnson, Mikhail Barybin and Timothy Jackson to earn this honor,” said Chancellor Bernadette Gray-Little. “I also want to congratulate our renowned University Honors Program, which supports talented students like Ryan from the day they step onto campus and helps them attain their goals, no matter how lofty.”

“My experience at KU has been fantastic, the Honors Program has been very helpful, my professors have been highly skilled, and the ability to get involved in research as a freshman was invaluable,” said Limbocker. “Most critically, I have amazing mentors. None of this would have been possible without them. I strongly encourage any student to get to know amazing researchers like professors Johnson, Barybin, and Jackson beyond the classroom setting.”

While at KU, Limbocker has utilized electrochemical methods to monitor neuronal release dynamics on a rapid timescale. In doing so, the research group has elucidated alterations in dopaminergic neurotransmission implicit in Huntington’s disease and post-chemotherapy cognitive impairment in an attempt to understand the mechanisms of neurodegeneration.

KU has had one previous Gates-Cambridge Scholar, 2009 awardee Thornton W. Thompson. Thompson, who graduated in 2009 with a bachelor's degree in cellular biology, is currently pursuing a doctorate in molecular and cell biology at the University of California at Berkeley. He earned his MPhil from Cambridge in medical sciences from Cambridge in 2010.