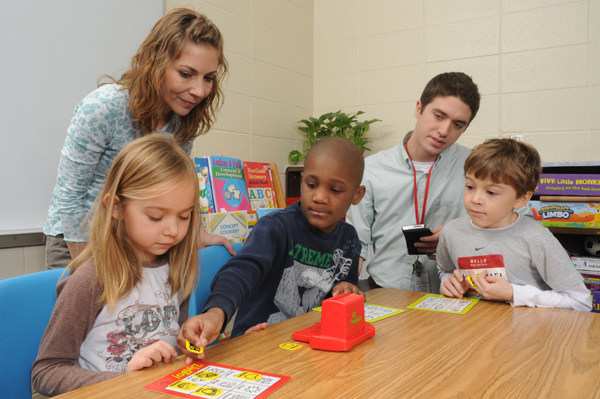 LAWRENCE — When Debra Kamps, senior scientist at the University of Kansas Life Span Institute, first began researching how to improve the social and communication skills of children with autism in natural settings like schools in the 1970s, it was hard to find children with autism spectrum disorders (ASD) who were in classrooms with their typically developing peers.

Today, Kamps and her colleagues from KU and the University of Washington can say with certainty that they know how teachers, speech therapists and others can teach social and communication skills to kids with ASD and their peers in the classroom, at lunch and even at recess after the results of the first large randomized study of a social communication intervention verified years of earlier research.

“We know how to do this, and our research has shown us that it is not hard to teach people how to do it,” she said.

The four-year study, funded by the U.S. Department of Education, involved 95 students with ASD in Kansas and Washington. Of that group, 56 children participated in a two-year intervention from kindergarten through first grade in which each child was grouped with two to three typically developing classmates in a peer network, while the remaining 39 were the control group.

The social peer network focused on teaching social communication skills such as requesting, commenting and saying “niceties” such as please and thank you while playing with toys and board games.

To find out if the children were continuing to use social skills, the researchers followed up with probes outside of the intervention sessions at four points in time.

“We found that the children who participated in the social network not only made significant progress in social communication during the intervention but also made many more initiations to their peers in general,” Kamps said. “Teachers also reported that children in the intervention were more social and had better classroom behavior.”

Although peer networks are still not used routinely in schools, often due to lack of resources, Kamps hopes that the promising results from larger studies will change that, and she said that some teachers who participated in the study have adopted the Peer Networks intervention in their classrooms.

“Seeing the expression on the faces of the children when their peer buddies come to class — that’s what’s kept me going all these years,” she said.

Kamps is also the director of the University of Kansas Center for Autism Research and Training established in 2008 with public and private funds. Kamps-led studies have been cited in national references and reports, including one by the National Research Council.

See video from the project here.

Photo: A joint KU and University of Washington randomized trial shows that children with autism can learn how to be social with their peers. The four-year study included children and staff from Prairie Park Elementary in Olathe in 2011. Shown are Amy Akin, paraeducator, and Todd Miller, former KU graduate research assistant.