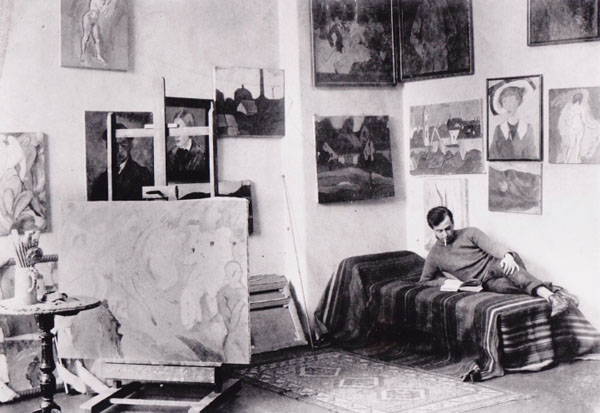 LAWRENCE — In 1911 one of the most important art events of the 20th century, the Blue Rider exhibition, opened in Munich. Helping lay the foundation for modern art, the exhibition included six works from Albert Bloch, a Saint Louis native and the only American who took part in the group’s first show. 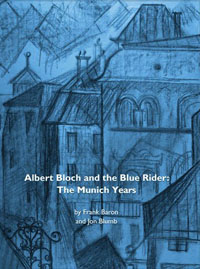 In “Albert Bloch and the Blue Rider: The Munich Years,” Frank Baron, University of Kansas German professor emeritus, and Jon Blumb, a local photographer, provide an overview of Bloch’s work from the Blue Rider era and the decade he spent contributing to European exhibitions.

Although Bloch didn’t receive the same level of recognition as did other artists in the Blue Rider group, such as Wassily Kandinsky and Franz Marc, Baron argues examining the evolution of Bloch’s work has merit.

“I realized how important this book would be for understanding the artist’s work during one of the most significant periods in modern art history, a period in which the artists who were in Munich were the center of the art world,” Baron said.

The exploration of Bloch’s Munich years is Baron’s third book about the artist, who would go on to chair the art and art history department at KU. Thanks to archives from Bloch’s widow, Anna Francis Bloch, who died in Lawrence last April at the age of 101, Baron was able to pull from two record books that Bloch kept while in Germany. The recently released book has 140 photographic reproductions of photos of Bloch’s work that were part of the artist’s record book. Some of the photographed paintings in Bloch’s record book now hang in museums around the world, others were sold, destroyed by Bloch, or lost to bombings during World War II.

“You can see how Bloch’s work evolved over time,” Baron said.

Born in 1882, Bloch began his career by drawing comics for the St. Louis Post and as a cartoonist for The Mirror, a political and literary journal also based in St. Louis. Supported financially by The Mirror’s editor, Marion Reedy, Bloch went to Europe in 1908 to further his art training and settled in Munich in 1909.

For the first few years, Bloch spent much of his time observing and sketching the nightlife in Munich’s poorer neighborhoods and drawing caricatures of artists and writers in German cafés. He attracted the attention of Russian artist Kandisky and German artist Marc, who invited him to be part of a modernist artist association and later the Blue Rider exhibit.

“He painted a lot and in an interesting way that made his German acquaintances realize he was an important artist,” Baron said.

The first Blue Rider exhibition opened in Munich in December 1911 with six of Bloch’s canvases. In the second Blue Rider exhibition, which opened in March 1912, Bloch had eight pieces. Over the next few years, he continued to show his work in avant-garde exhibitions throughout Europe and had a solo exhibit in the well-known Berlin gallery Der Sturm. With the outbreak of World War I, the Blue Rider group dispersed. Two of its members, Marc and August Macke, died in the war. The war influenced both Bloch’s subject matter and his ability to provide for his family.

“It was very difficult for Bloch because he had to survive and he was constantly searching for ways to sell his paintings,” Baron said. “At the end of war, it was just impossible. Germany was in shambles. It was hard enough for Germans to survive, let alone foreigners.”

By the time Bloch returned to the United States in 1920, he had contributed to at least 40 European exhibitions. Those exhibitions and the pieces that were shown in them are detailed in the book.

Once in the United States, Bloch spent a year teaching at the Academy of Fine Arts in Chicago before coming to KU as head of the painting and drawing department. He spent the next 24 years teaching art and art history at KU. He died in 1961.

Today Bloch’s works are shown throughout the world as an example of early modernist painting. Because Bloch spent his later years focused on teaching rather than painting and was no longer part of a vibrant circle of contemporary artists, historians tended to look past his work. He hasn’t received the recognition that other Blue Rider artists have, but Baron would like that to change.

In 2014, a successful exhibition of Bloch’s drawings and prints took place at the Spencer Museum of Art. In the fall, there will be exhibitions of paintings at the Lawrence Arts Center and the Mulvane Art Museum in Topeka.

“The potential for Bloch to be better known is there,” Baron said. “Perhaps additional exhibits at the national and international level are needed to have people take notice.”

The book can be purchased on demand at Jayhawk Ink at KU.

Photo: Albert Bloch is shown in his Munich Studio.