LAWRENCE — A mother’s support can be as vital to animals as it is to humans. Across the vast diversity of life on our planet, the care of a mother makes survival itself possible. Indeed, the instinct for mothers to protect and nurture offspring is rooted in more species than scientists have understood before now.

“Maternal care is a phenomenal behavior, whether it's a beetle, a shark or a monkey,” said Caroline Chaboo, assistant professor of ecology and evolutionary biology at the University of Kansas. “The investment of mothers with their time, their vigilance, their grooming and cleaning, finding and providing food, putting their own lives at risk, often not eating for themselves — it's remarkable that parental care is so one-sided.”

This Mother’s Day, biologists and researchers at KU’s Biodiversity Institute spotlight six exceptional mothers from the natural world as a way of honoring moms everywhere.

Which style of mothering reminds you most of your own mom? 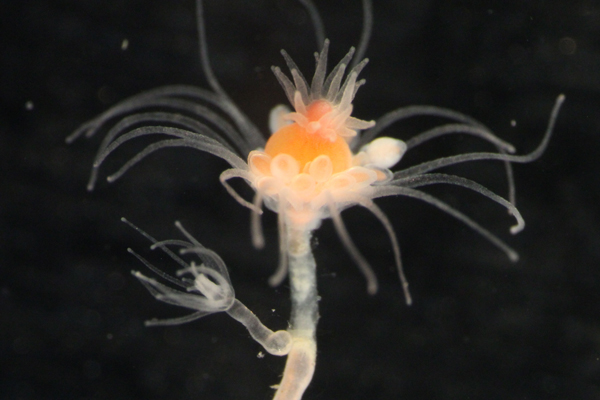 1. Joined at the polyp. A lot of human mothers wish they knew their kids’ whereabouts 24/7. That’s not an issue for one hydrozoan mother that physically melds with its offspring. KU biologist Paulyn Cartwright was first to discover this unique method of rearing wee hydrozoans.

“My former graduate student Annalise Nawrocki and I discovered that the hydrozoan Ectopleura larynx doesn’t form colonies through the typical mode of asexual reproduction — but instead makes its colony by fusing offspring polyps to the mother,” Cartwright said. “Female Ectopleura brood their babies in pouches called gonophores. When babies develop into juvenile polyps, they’re released from the mother to settle on a substrate — frequently it’s the mother polyp.”

Eventually, juveniles fuse their tissues with their mother's, effectively forming a colony of the mother and her offspring polyps.

“Because this colony shares a digestive system, the mother can catch food and the offspring can benefit from the nutrients. In a benthic marine environment, where there is fierce competition for substrate space and food, Ectopleura offspring choose to stay close to home so that their mother can better provide them with these scarce resources.”

Cartwright, an associate professor of ecology and evolutionary biology, added, “I’m just now noting the irony of my research, given that I’m about to send my eldest child off to college. I'm feeling a bit envious of the Ectopleura moms that don't have to undergo this separation.” 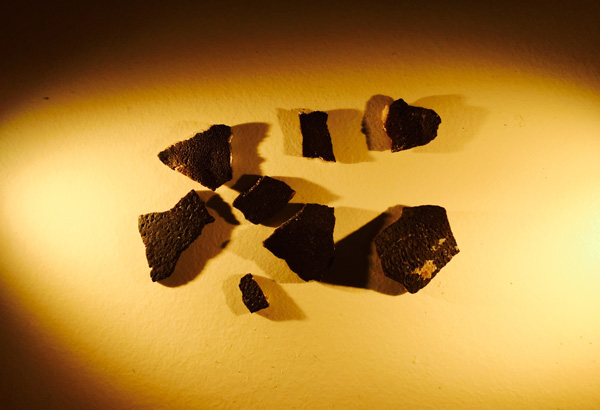 2. Mom-ausaur. The duckbilled dinosaur Maiasaura would be nominee for Mom of the Year — if that year fell in the Cretaceous Period. According to David Burnham, preparator with the vertebrate paleontology division of the institute, discovery of Maiasaura marked the first instance where scientists could prove dinos fed and looked after their offspring.

“Maiasaura hails from Montana 75,000,000 years ago, and the name means good mother lizard,” Burnham said. “A locality called Egg Mountain is a hillside that preserves the nesting grounds of Maiasaura. Entire nests have been found as well as hatchlings and babies of different ages. After examining the baby bones scientists could determine that their leg joints were too weak to allow them to travel very far from the nests. So scientists believe Maiasaura had to feed her babies for them to survive and probably brought the food to the nestlings until they could be on their own.” 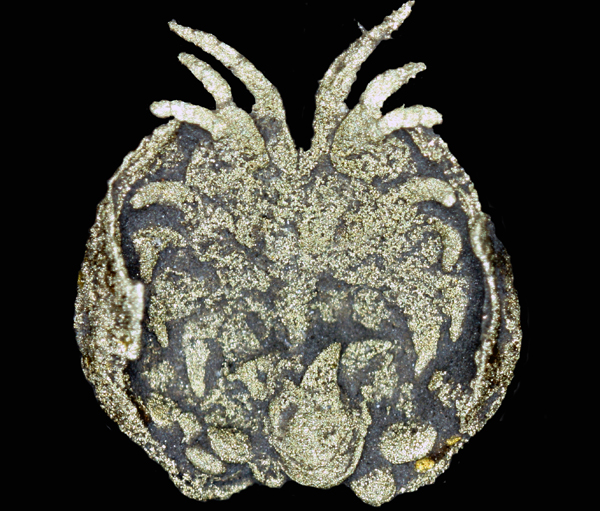 3. Saved by the shell. Fossils of the 450 million-year-old crustacean Luprisca incuba are believed to be the oldest verified evidence of ovarian-to-juvenile brood care anywhere. Last year, a research team found a “nursery in the sea” depicting the fossilized scene of a mother ostracod actually carrying her eggs and offspring.

“Some kinds of ostracod lay their eggs into the ocean and hope for the best, but this particular group take care of their young by brooding the embryos under the protection of their shell,” said Úna Farrell, invertebrate paleontology collection manager at the institute.

The ancient Luprisca incuba mother looks to have been a success: today, tens of thousands of species of ostracod live in modern oceans, lakes and rivers — such as common shrimp, lobster and crabs. 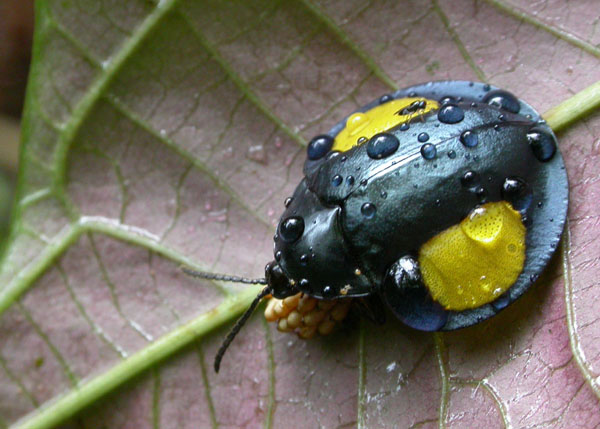 "A leaf beetle mother will keep an eye on the eggs, grooming and guarding them," Chaboo said. "She’ll oversee her herd of larvae as they eat, while she keeps watch for flying attackers, like wasps, and also pedestrian attackers, like ants. She moves between the attacker and the babies and will stamp her foot and try to shoo off the intruder."

The leaf beetle's fierce mothering is critical to the survival of the next generation, according to Chaboo. “If she’s removed or lost, all the babies die," she said. "It’s pretty crucial that she is around to ensure some of the offspring survive and reach adulthood.” 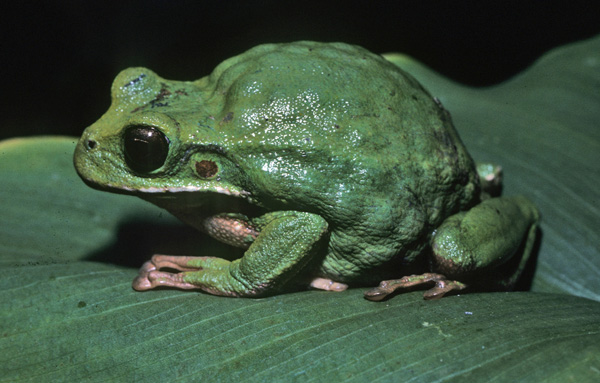 5. Built-in baby backpack. The term “marsupial” usually evokes kangaroos, but mother marsupial frogs such as Gastrotheca monticola from northern Peru brood eggs in a pouch on their back, according to William Duellman, curator emeritus with the institute’s division of herpetology.

“During embryonic development gaseous exchange exists between large embryonic gills and maternal tissue, but no energy is provided by the mother,” said Duellman, who has authored a new book on marsupial frogs. “In some species that brood up to 100 eggs, the young are born as tadpoles that complete their development in ponds. However, most marsupial frogs have 20 or so eggs containing a large amount of yolk, which is sufficient to provide nourishment for the embryos to pass through the ‘larval stage’ in the pouch — the froglets emerge from the pouch and begin life on their own.” 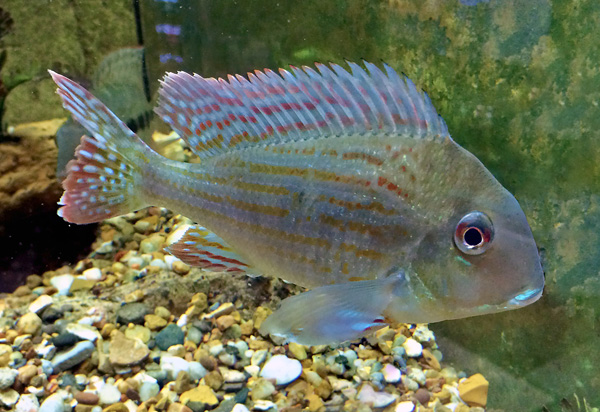 6. Her lips are sealed. In many species of fish, mothers safeguard eggs within their mouths until hatching, when the little fish swim free. But in some species such as Geophagus altifrons (aka the Tocantins Eartheater) from the Amazon River in Brazil, mom continues to protect mobile juveniles in their mouths for quite some time after hatching.

“A number of different cichlid species are famous for their mouth brooding where the mother will take care of the eggs and free swimming fry for upwards of one month,” said William Leo Smith, assistant curator with the institute. “While mouth-brooding the eggs, the mother will not take any chances with losing an egg. She will go several weeks without eating, spending all of her energy making sure the eggs are protected. After they hatch she will continue to mouth-brood them, but instead of keeping them in her mouth, she will keep them near, using different signals to communicate to her children that it is time to come home… to her mouth.”