LAWRENCE — A team of scientists based largely at the University of Kansas and the Burke Museum of Natural History and Culture in Washington has developed methods of using commercial-grade laser equipment to find and analyze fossils of dinosaurs. Their techniques are introduced via a paper in the journal PLOS ONE today. 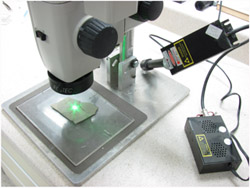 “Nobody else is doing this, as far as I know,” said David Burnham, preparator at KU’s Biodiversity Institute & Natural History Museum and a co-author on the paper. “Basically you want to excite electrons in the object so it emits photons you can see. This requires a camera filter of some kind, and that’s where an orange or yellow long-pass filter is used — it takes away everything else so we can see the photons.”

The authors first used lasers a few years ago during examination of a Microraptor specimen from China, when they noticed a second fossil in the surrounding material.

“We had a mystery fossil on the same piece,” Burnham said.

The KU researchers contacted Thomas Kaye of the Burke Museum for help identifying it. “We sent him the specimen, and he came up with this laser technique,” Burnham said.

Since then, the researchers have worked to fine-tune the laser-identification process, often using lasers on samples from Jehol Biota, a “mother lode” of 127-million-year-old fossils unearthed in the Chinese province of Liaoning. 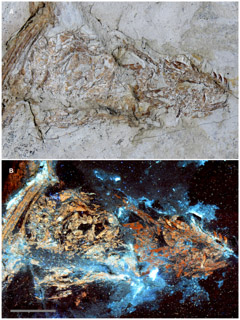 “There have been many dinosaurs with feathers and scales that nobody has seen before because of this locality in China, where volcanic ash has preserved fossils much like in Pompeii,” Burnham said. “Tissues are preserved — not just the bones. With things like feathers, we can see details really well using lasers. If the fossils themselves won’t fluoresce, the background will. We can see if a primitive feather looks like a modern feather.”

Because high-end technology has become less expensive, the researchers have been able to buy medium-power short wavelength lasers on websites like eBay and experiment with digital photographic equipment and filters. Thus, they’ve developed novel uses for lasers, such as backlighting opaque specimens to reveal detail and even finding new fossils hidden within rocks or dirt.

“We’re finding that a blue hand-held laser is easiest to use — it’s sold by a company called Dragon Laser,” Burnham said. “You can buy them at different wavelengths and energy levels — you just have to be really careful to wear protective glasses.”

In the PLOS ONE paper, the researchers give examples of using lasers in various ways: silhouette illumination of carbon fibers, such as the feathers of a primitive bird; microscopic imaging of specimens fluorescing beneath the specimen surface to capture details; and in-situ analysis with minimal invasiveness, where the team analyzed the arm bracelet on the skeleton of a small girl from the mid-Holocene without removing or disturbing it, finding it was fashioned from a hippopotamus tooth.

Indeed, the researchers have even developed a proof-of-concept automated fossil sorter that employs a laser beam to pick microfossils from surrounding rocks and dirt.

“The reason we collect microfossils is to find tiny little teeth and they preserve well because they’re enamel — the hardest substance body produces,” Burnham said. “You walk around, find fossils, take burlap sack and fill it with dirt, or matrix. Before, we’d bring it back to museum and go through it with a magnifying glass, separating things by hand, one by one — mostly getting rocks. To speed this up, now we have a machine that emits laser light and pops out the teeth.”

Beyond these applications, the KU researcher said that lasers would allow paleontologists to spot phony fossils, or specimens cobbled together from many fossils and passed off as whole. This is because bones from different places or times would emit dissimilar fluorescence once exposed to laser light.

“It allows us to detect fakes,” Burnham said. “It’s been going on ever since man has been around. People are trying to make the specimen look better or more intact. Museums want pretty things, so people doctor these up to make them look better. People do it fraudulently because they’re easier to sell when you make something more complete. Some artists are so good you can’t tell where the real thing stops and the fake thing begins. With lasers, now we’ll know.”

Authors of the PLOS ONE paper are Kaye, Burnham, KU graduate Amanda Falk of Southwestern Oklahoma State University; Michael Pittman of the University of Hong Kong; Paul Sereno of the University of Chicago; the late Larry Martin of KU; Enpu Gong of Northeastern University in Liaoning, China; Xing Xu of the Institute of Vertebrate Paleontology and Paleoanthropology in Beijing, China; and Yinan Wang.

Top image: A green laser mounted on a stereo microscope. Middle image: Is this Microraptor skull a composite? (A) The skull under white light shows subtle color differences. (B) Under laser-light stimulation, the bone fluoresces from differences in fossil mineralogy, indicating the skull is likely a composite. Bottom image: Feather under reflected and matrix fluoresced illumination. (A) Reflected light microscopy, with only barbs visible. (B) Polarized light, some traces of barbules. (C) A laser-stimulated fluorescence of matrix behind carbon film backlights the feather and renders the barbules visible across the entire field of view.