LAWRENCE — On the surface, international trade law may seem like a specialized topic that affects only a niche subsection of the population. But as international headlines surrounding trade sanctions against Iran and negotiation of the Trans Pacific Partnership and alleged currency manipulation by China demonstrate, the field has grown exponentially and is felt in daily life around the world. To that end, Raj Bhala, one of the world’s foremost experts in international trade law, has authored the fourth edition of International Trade Law: An Interdisciplinary, Non-Western Textbook.

The seminal work, originally published in 1996, has grown as the field has evolved in the last 20 years. Originally a single, 800-page volume, the text is for the first time a two-volume, 100-chapter, nearly 3,000-page comprehensive analysis of international trade law. It became available Aug. 18, in time for the 2015-16 academic year.

The book is a “textbook” in the classic sense. Rather than rely on excerpts of readings, as do “casebooks,” Bhala researched and wrote almost the entirety of both volumes. The work is a synthesis of the enduring, the contemporary and the avant-garde. It embodies time-honored precepts, highlights their modern-day relevance and anticipates the world trading system over the next 50 years, when his students will practice law. 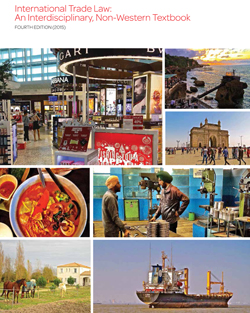 “Since 1996, which was just after NAFTA and the World Trade Organization were born, the field of international trade law has greatly broadened and deepened. The broadening has come in that the field is now viewed at two levels, both theoretical and practical. The deepening is largely because of the proliferation of items put on the international trade agenda,” said Bhala, associate dean for international and comparative law and Rice Distinguished Professor at the University of Kansas School of Law.

The textbook is separated into two parts, fundamental obligations and remedies and preferences. The volumes can be used as part of a two-semester, yearlong course or either could be used individually as a single-semester class. Part one examines moral, economic, historical, institutional, adjudicatory and legal foundations of free trade as well as customs law and trade rules about three critical sectors: agriculture, services and intellectual property. Part two explores remedies against “unfair” trade, unilateral trade remedies, national security, free trade agreements, trade and labor, trade and environment, and preferences for poor countries.

One of the first textbooks on the topic, International Trade Law and its ensuing editions are in use in more than 100 law schools across the United States and the world and have been translated into several languages, including Vietnamese. Nineteen top international trade scholars and experts from the United States, Australia, China, India, Ireland, Mexico, New Zealand, Nigeria, United Arab Emirates and the United Kingdom have endorsed the fourth edition.

“In my experience, few books set a first-rate standard for students and teachers alike. This textbook does. Its interdisciplinary, non-Western orientation, coupled with its coverage of time-honored precepts and contemporary issues, is a novel and timely synthesis,” said Jagdish N. Bhagwati, University Professor of Economics, Law, and International Affairs at Columbia University.

As implied by the book’s title, international trade law is a discipline requiring knowledge of the laws, customs and cultures of nations around the world. Bhala said the text, published by LexisNexis, is called a non-Western book because it is intended to help prepare students to work in a changed global society.

“In choosing cases and illustrations, the book is tenacious in using non-Western examples,” Bhala said. “It’s not a Euro-centric or Washington insider-centric book. The reason is the non-Western world is the one in which our students will be practicing. They will work in a world in which India is the largest free-market democracy and most religiously diverse country, in which China’s rise is undeniable but its future uncertain, and in which European economies aren’t dominant, as Greece’s recent troubles demonstrate. It’s imperative to prepare students for that future, even if they plan to work completely domestically. What happens ‘over there’ already affects them ‘right here’ and besides, there is plenty of empirical evidence that people change jobs and careers multiple times.”

Bhala gives credit to students for the book’s success as well. Research assistants who have worked on the book’s four editions are credited. Those students have gone on to practice law across the world, in centers like Bangkok, Brussels, Dubai, Hong Kong, Mexico City, New York, Tokyo, Chicago, Houston and Washington, D.C. Some have also earned highly prestigious clerkships on the United States Court of International Trade in New York and Court of Appeals for the Federal Circuit in Washington, D.C.

“In working to convey the breadth and depth of a field as complex as international trade law, I have been extremely fortunate to work with fantastic research assistants here at KU Law,” Bhala said. “I love producing something for students to learn from, that earns them a reputation for being trained at a world-class level. I absolutely could not do it without them, and to see them flourish after our time together is an abiding joy.”