LAWRENCE – In the 60 years since 14-year-old African-American Emmett Till was beaten and shot to death in the Mississippi Delta, different versions of the event have been told in courtrooms, magazines, books and documentaries. Now, a University of Kansas professor is working on a project that would use a Google app to tell the many-sided story. 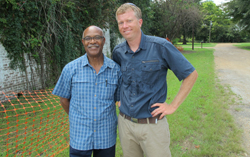 Aug. 28 marks the 60th anniversary of Till’s death, which continues to be a reference point in America’s dialogue on race. In recent years, Till’s murder has been compared to the controversial deaths of other African-American youth such as Trayvon Martin and Michael Brown.

“He has become the marker for how the civil rights movement started,” said Dave Tell, associate professor of communication studies. “Rosa Parks said she was thinking of Emmett Till when she refused to give up her seat on a Montgomery bus.”

Tell, who wrote  “The ‘Shocking Story’ of Emmett Till and the Politics of Public Confession” for the Quarterly Journal of Speech in 2008, is working with partners in Mississippi, Florida and Pennsylvania to create location-specific information about Till’s death that will be part of Google’s Field Trip app. 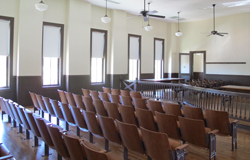 In 1955, Till, a Chicago youth visiting relatives in Mississippi, was savagely beaten and killed after whistling at and possibly talking to a 21-year-old white woman. That fall an all-white jury acquitted the woman’s husband, Roy Bryant, and his half-brother J.W. Milam on charges of murder. Four months later, the two confessed to killing Till in an interview printed in Look magazine.

More than 100 potential sites tied to Till’s murder have been identified for inclusion in the app. By September 2015, the Field Trip app should have information on several of the sites. Among the locations:

For Tell, each location is chance to tell a piece of the story, even if the pieces don’t always align with one another.

“As you are driving around the Delta, you’ll have a profound sense of not just what happened to Emmett Till but how so many different people have told the story of Emmett Till in different ways for different reasons,” Tell said.

Sixty years after Till’s death, major facts in the case are still contested. Versions of the story disagree on where the murder site was, how many people were involved in beating and killing Till, and in which county his body was found.

While many scholars would like to uncover what truly happened after Till was pulled from his bed in the early morning hours of Aug. 28, 1955, Tell is more interested in how the different narratives have developed.

“The diversity in the stories is what makes the Emmett Till story so powerful,” Tell said. “If there was only one version of the story that everyone knew was true, it would have never had the staying power that it has.”

The opening of an FBI investigation in 2004 and recent documentaries contradicting the Look magazine article have ensured that Till continues to be part of the country’s conversation on race, Tell said. While the past decade has seen historical markers erected in the Mississippi Delta commemorating Till’s death, Tell said many of those signs are based on the now-disproven magazine version of the story.

“And that is problematic,” Tell said. “Because the black community sees those signs as the white version of what happened to Emmett Till.”

This month, Tell will travel to Mississippi to continue working on the app.

Tell is collaborating with Patrick Weems, director of the Emmett Till Interpretive Center in Sumner, Mississippi; Christian Spielvogel, a digital humanist at Pennsylvania State University, and Davis Houck, a communication and information professor at Florida State University. A Scholars on Site award from the KU Hall Center for the Humanities is funding the project.