LAWRENCE — The search for life beyond Earth is one of the grandest endeavors in the history of humankind — a quest that could transform our understanding of our universe both scientifically and spiritually. 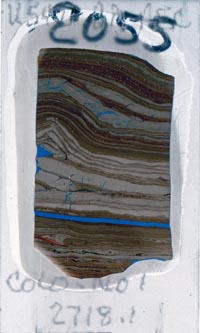 With news coming this week that NASA has confirmed the presence of flowing saltwater on the surface of Mars, the hunt for life on the Red Planet has new momentum.

“One of the many reasons this is exciting is that life as we currently know it requires water,” said Alison Olcott-Marshall, assistant professor of geology at the University of Kansas. "So the fact that it's present at Mars means that the most basic and universal requirement for life was fulfilled.”

In the journal Astrobiology, Olcott-Marshall recently has published an analysis of Eocene rocks found in the Green River Formation, a lake system extending over parts of Colorado, Utah and Wyoming.

Marshall and co-author Nicholas A. Cestari, a masters student in her lab, found these Green River rocks have features that visually indicate the presence of life, and they argue that probes to Mars should identify similar indicators on that planet and double-check them through chemical analysis.

“Once something is launched into space, it becomes much harder to do tweaks — not impossible, but much, much harder,” Olcott-Marshall said. “Scientists are still debating the results of some of the life-detection experiments that flew to Mars on the Viking Missions in the late '70s, in a large part because of how the experiments were designed. Looking at Earth-based analogs lets us get some of these bumps smoothed out here on Earth, when we can revise, replicate and re-run experiments easily.” 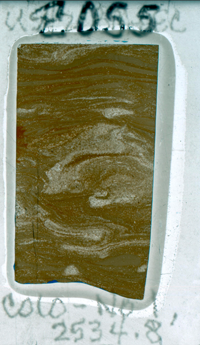 The researchers examined cored samples of rock from 50 million years ago that included sections of “microbial mats.”

“Microbial mats are essentially the microbial world’s version of apartment buildings — they are layered communities of microbes, and each layer represents a different metabolic strategy,” Olcott-Marshall said. “Generally, the photosynthetic microbes are at the top, and then every successive layer makes use of the waste products of the level above. Thus, not only does a microbial mat contain a great deal of biology, but a great number of chemicals, pigments and metabolic products are made, which means lots of potential biosignatures.”

At times during the Eocene, the Green River Formation’s water chemistry purged fish and other organisms from the lake, providing room for these microbes to thrive.

“During these times, ‘microbialites’ formed — these are rocks thought to be made by microbial processes, essentially the preserved remnants of microbial mats. The Green River Formation has a wide variety of these structures, and these features are why we went looking in these rocks, as microbialites are one life-detection target on Mars.”

First, the researchers visually inspected the cored samples for signs of biology by identifying geological signs associated with microbialites — such as “stromatolites.”

“These are things like finely laminated sediments, where each lamination follows the ones below, or signs of cohesive sediment, things like layers that roll over onto themselves or are at an angle steeper than what gravity would allow,” Olcott-Marshall said. “These are all thought to be signs that microbes are helping hold sediment together.”

If visual examination pointed to the presence of biology in sections of the rock cores, the researchers looked to confirm the presence of life. They powdered those rock samples in a ball mill, and then used hot organic solvents like methanol to remove any organic carbons that might have been preserved in the rocks. That solvent was then concentrated and analyzed with gas chromatography/mass spectroscopy.

“GC/MS allows an identification of compounds, including organic molecules, preserved in a rock,” Olcott-Marshall said. “Viking was the first time that a GC/MS was sent to Mars, and there is one up there right now on Curiosity collecting data.”

Through GC/MS, the researchers determined that rock structures appearing to be biological indeed hosted living organisms millions of years ago: analysis showed the presence of lipid biomarkers.

“A lipid biomarker is the preserved remnant of a lipid, or a fat, once synthesized by an organism,” Olcott-Marshall said. “These can be simple or very complex. Different organisms make different lipids, so identifying the biomarker can often allow a deeper understanding of the biota or the environment present when a rock was formed. These are a type of biosignature.”

The researchers said their results could be a powerful guide for sample selection on Mars.

“There is a GC/MS on Curiosity right now, but there are only nine sample cups dedicated for looking for biomarkers like these,” Olcott-Marshall said. “It’s crucial those nine samples are ones most likely to guarantee success. Additionally, one of the goals of the planned 2020 rover mission is to identify samples for caching for eventual return to Earth. The amount of sample that can be returned is likely very small, thus, once again, doing our best to guarantee success is very important. What this shows is that we can use visual inspection to help us screen for these samples that are likely to be successful for further biosignature analysis.”

She said microbial and non-microbial rocks are found in similar environments, with identical preservation histories for millions of years, and many of the same chemical parameters, such as amounts of organic carbon preserved in the rocks.

“The only difference is that one rock is shaped in a way people have associated with biology, and sure enough, those rocks are the ones that seem to preserve the biosignatures, at least in the Green River,” she said.

Top image: Petrographic thin section made from core sample. This 30 micron thin slice of rock allows a view of the types of features thought to be microbial. Here, the blue layers are an epoxy added in to see void-space in the rock, and the grey is sediment. The morphology of the orange-brown layers are suggestive of microbial activity, such as they way they roll over themselves in the bottom left and smoothly drape over the triangular feature. This type of deposition demonstrates that the sediment had to have a degree of cohesive stickiness, such as that provided by the presence of microbial mats.

Bottom image: Petrographic thin section made from core sample. This 30 micron thin slice of rock allows a view of the types of features thought to be microbial, such as the layers that fold over themselves in the middle of the sample marked 2534.8’. This demonstrates that the sediment had to have a degree of cohesive stickiness, such as that provided by the presence of microbial mats.