LAWRENCE — One of scariest movies of all time, “Psycho” is Alfred Hitchcock's work at his finest. But a University of Kansas scholar thinks deleting a scene would make the movie even darker.

As part of an argument for why fan editors should have the artistic freedom to share their re-edited versions of feature films, Joshua Wille, a doctoral student in film and media studies, tweaked the final minutes of “Psycho.” 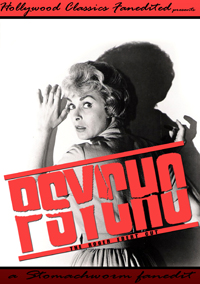 In 1998, while reviewing Gus Van Sant’s remake of the movie, film critic Roger Ebert questioned the use of a psychiatrist character to explain Norman Bates’ psychosis. Following Ebert’s suggestion, a fan editor by the name of "Stomachworm" made a cut of the film in 2009 that shortened the psychiatrist’s monologue at the police station. The cut, which was acknowledged by Ebert as being effective, is no longer accessible online because of copyright issues.

Wille reconstructed the alternative version based on Ebert’s critique, which keeps the first few seconds of the psychiatrist’s monologue. He then created another cut that takes out the psychiatrist’s speech entirely and jumps to Norman sitting alone in the jail cell with the voice of his mother in his head.

“That version presents a different kind of ending,” Wille said. “There is no voice of reason, no psychiatrist to care for Norman, no sympathetic authority figure. There is just Norman and his madness. And that is a real dark note to end the movie on.”

The “Psycho” cuts are discussed in the article “Dead Links, Vaporcuts, and Creativity in Fan Edit Replication,” which Wille wrote for the journal Transformative Works and Cultures.

Fan editors, Wille said, maintain their work is noncommercial, stand against video piracy and demand that their viewers own a legal copy of the film or television show before downloading the fan-edited version. Because popular video viewing sites, such as YouTube and Vimeo, frequently take down fan edits on the grounds of copyright infringement, fan editors often share their transformative works on the same channels that distribute pirated content. And when these controversial online sites are deactivated on the grounds of piracy, access to fan edits like “Psycho: The Roger Ebert Cut” are jeopardized.

“Fan editing is experimental and critical in nature. The media industry and regulatory practices aren’t caught up with the wave of creativity that is happening,” Wille said.

In the article, Wille coins the term "vaporcut" to describe actor and "Star Wars" fan Topher Grace’s re-edit of the "Star Wars" prequel trilogy into a single 85-minute fan edit, “Star Wars Episode III.5: The Editor Strikes Back.” The fan edit has never been made publicly available; however, it has been discussed online, and a description of its alternate narrative structure is available.

Pulling from the word vaporware, which is used to describe technology that is rumored, written and talked about, but never actually released, Wille uses vaporcut to describe fan edits that are discussed but not available to viewers. They are different from fan edits that once were available online but have been removed from the web.

“If we are going to conscientiously study fan edits, we need to be careful not to give credence to works that are unsubstantiated. We have to be careful how we talk about them,” Wille said.

Wille also looks at the fan edits created by director Steven Soderbergh, who has recut the much maligned 1980 film “Heaven’s Gate,” created a mash-up of the 1960 and 1998 versions of “Psycho” and changed “Raiders of the Lost Ark” to black and white and rescored the film. Soderbergh also made a fan edit of “2001: A Space Odyssey” that he eventually removed from his website at the request of Warner Bros. and the estate of Stanley Kubrick.

In addition to his own work re-editing “Psycho,” Wille points to new fan edits that have been created by people trying to reconstruct Grace and Soderbergh’s projects.

“Fan editors have attempted to manually recreate these elusive works, but they naturally produce variants that reflect their own creative choices, similar to the way in which an inspired cook may deviate from a recipe,” Wille said.