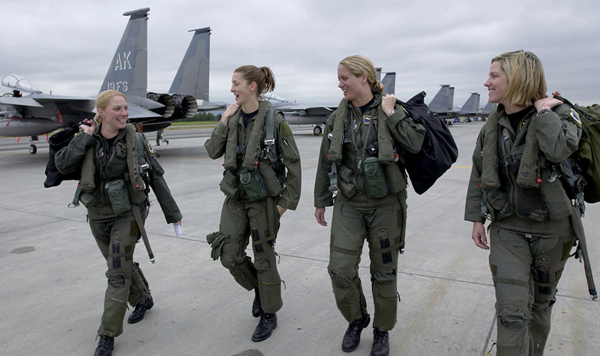 LAWRENCE — On the eve of Veterans Day, the Women's Foundation released findings from Project Diane, a study examining the integration of women into military. The research, conducted in partnership with the University of Kansas and the Army Research Institute, shows significant barriers and potential benefits to gender integration in the U.S. Army Special Forces.

"We find a great deal of resistance to gender integration in the military, particularly in the elite Special Operations units," said Alesha Doan, associate professor of political science and chair of the Department of Women, Gender and Sexuality Studies. "While some of this is related to explicit policies regarding physical standards, many of the barriers are rooted in the traditional gender stereotypes that are often hidden and unexamined by military personnel in their everyday interactions with each other."

Doan and Shannon Portillo, associate professor in the KU School of Public Affairs and Administration, were part of the Women's Foundation research study, presented at the National World War I Museum and Memorial. The project included a large-scale survey and analyzed 24 focus groups with 198 Special Forces men and women in order to identify potential barriers and benefits to female integration in Special Forces.

"The Women's Foundation is committed to working for meaningful change," said Wendy Doyle, president & CEO of the Women's Foundation. "We hope this research draws attention to the stereotypes and institutional barriers that hold women back in the military and other male-dominated professions so they can be addressed, allowing women greater opportunities to lead."

In a significant departure from traditional military policy, the Pentagon has begun limited gender integration into combat units with more on its way. Doan and Portillo said they would discuss barriers and potential benefits to gender integration.

"By sharing the experiences of women and men within the organization, we highlight the obvious as well as covert ways traditional gender stereotypes permeate seemingly gender neutral policies and practices, reinforcing barriers to women's leadership and full integration in the military," Portillo said.

Findings and themes that emerged were confidence opportunities and limitations, structural barriers and the value of sharing experiences. The report's takeaways included the importance of both mentoring and support networks and changing the conversation such as challenging underlying gender stereotypes, not only for women in the military, but in corporate and private sectors as well. In addition, the researchers recommend that policy changes aimed at integrating women into combat forces of the military must take into account the "entrenched nature of gendered practices."

"We are proud to support the Women's Foundation's leadership in breaking down these barriers and hope the findings from this research will prompt change in civilian workplaces as well as the military so that more women can lead and achieve their full potential," said Jack Ovel, regional vice chairman for U.S. Trust Company, representing Bank of America in Kansas City.

"This research is an important step in changing not only structural barriers but in changing mindsets and assumptions we have about military women," said Emma Toops, a retired U.S. Army major. "Highlighting the micro and macrobarriers in the workplaces of all women, not just military women, provides clear opportunities for change."

Doan and Portillo said future research on this topic would take an in-depth look at how gender oblivion undermines the Army's ability to adapt to changing global environments. However, they are recommending that policy changes aimed at integrating women into combat arms of the military must take into account the "entrenched nature of gendered practices."

"Training interventions must target all members of military and military support community, including Veterans Affairs and veteran support organizations, to better understand how gender covertly shapes the nature of daily practices," they said.

A copy of the Project Diane research report can be found here.

The Women’s Foundation promotes equity and opportunity for women of all ages, using philanthropy, research and policy solutions to make meaningful change. More information about the organization can be found at www.Womens-Foundation.org.