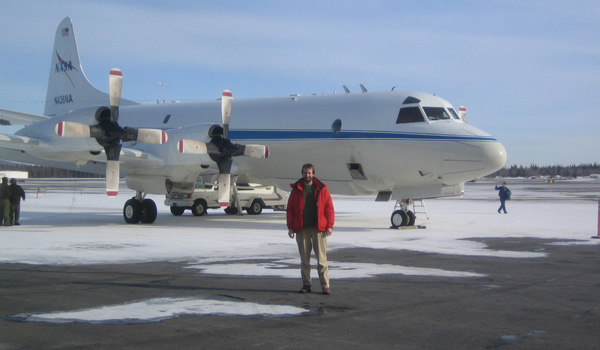 LAWRENCE — A study appearing in Science magazine today shows a vast ice sheet in northeast Greenland has begun a phase of speeded-up ice loss, contributing to destabilization that will cause global sea-level rise for “decades to come.” 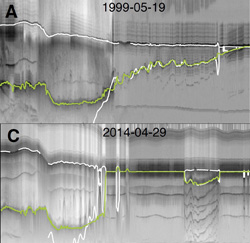 A team of scientists, including a researcher from the University of Kansas-based Center for Remote Sensing of Ice Sheets (CReSIS), found that since 2012 warmer air and sea temperatures have caused the Zachariæ Isstrøm ice sheet to “retreat rapidly along a downward-sloping, marine-based bed.”

By itself, the Zachariæ Isstrøm glacier holds enough water to trigger a half-meter rise in ocean levels around the world.

“The acceleration rate of its ice velocity tripled, melting of its residual ice shelf and thinning of its grounded portion doubled, and calving is occurring at its grounding line,” the authors wrote.

“Ice loss is happening fast in glaciological terms, but slow in human terms — not all in one day or one year,” said John Paden, associate scientist for CReSIS and courtesy associate professor of electrical engineering and computer science at KU, who helped analyze data about the thickness of the glacier’s ice for the study.

Paden’s collaborators include J. Mouginot, E. Rignot, B. Scheuchl, M. Morlighem and A. Buzzi from the University of California Irvine, along with I. Fenty and A. Khazendar of the California Institute of Technology.

“Within a few generations, ice loss could make a substantial difference in sea levels,” Paden said. “When you add up all the glaciers that are retreating, it will make a difference to a large number of people. Sea level has increased some over the last century, but only a small number of people have been affected compared to what is likely to come.”

Paden crunched data acquired by CReSIS during NASA’s Operation IceBridge and previous NASA flights over Greenland, including decades-old measurements of Zachariæ Isstrøm. The sensor development and data processing tools used to do this were funded through National Science Foundation and NASA grants, with the support of many CReSIS collaborators.

“There are several other sources of data, but one of them is the Landsat satellite imagery that goes back to 1975,” Paden said. “With that, you can look at what the ice shelf is doing, how it’s shrinking over time. Satellite optical and radar imagery were used to measure surface-velocity changes over time and to measure the position of the grounding line based on tidal changes.”

Paden said the “grounding line,” or the boundary between land and sea underneath a glacier, is a zone of special interest.

While air temperatures have warmed, causing boosted surface runoff, Paden said ice loss from calving off the front of the glacier into the ocean accounts for most of the ice mass reduction from Zachariæ Isstrøm.

“Ice floating out into the ocean and melting is greater than the ice lost from surface melting,” he said.

A neighboring glacier with an equal amount of ice, named Nioghalvfjersfjorden, is also melting fast but receding gradually along an uphill bed, according to the researchers. Because Zachariæ Isstrøm is on a downslope, it’s disappearing faster.

“The downward slope combined with warming ocean temperatures is what seems to be causing the acceleration now and why we predict it will continue to accelerate over the next few decades,” Paden said. “Until its grounding line is pinned on an upslope bed, then the dynamic effect is expected to decrease.”

Together, the ice in Zachariæ Isstrøm and Nioghalvfjersfjorden represent a 1.1-meter rise in sea levels worldwide. According to the KU researcher, the team’s work is intended to inform people in coastal areas who need to make choices about the future.

“From a societal standpoint, the reason why there’s so much focus on ice sheets is because predicted sea level rise will affect nearly every coastal country — the United States for sure, and low-lying countries with limited resources are likely to be the worst off. Mass displacements of potentially millions of people will affect countries that have no coastlines. We study this to have an understanding of how soon things are likely to happen and to help us use our limited resources to help mitigate the problem.”

Photos, from top: CReSIS researcher John Paden of the University of Kansas is shown with NASA P3 aircraft deployed to collect Greenland data for Operation IceBridge.

At right: Radar depth-sounder data from before and after the breakup of the Zachariæ Isstrøm ice shelf. The green line reveals the ice bottom, and loss of ice between 1999-2014. The white line represents hydrostatic equilibrium estimates of the ice bottom.