LAWRENCE — Today, NASA will deliver a Viking 400 unmanned aerial vehicle to the University of Kansas. Experts with KU’s School of Engineering and Center for the Remote Sensing of Ice Sheets will use the UAV to develop new technology for analyzing glaciers in Greenland tied to global sea-level rise.

“KU is a world leader in the development of airborne radar systems for characterizing Earth system properties,” said Matthew Fladeland, airborne science manager at NASA Ames Research Center. “KU students and faculty will have hands-on experience with a production air vehicle to complement curriculum and to facilitate the integration of radar instrument onto the aircraft.”

Emily Arnold, assistant professor of aerospace engineering at KU, will lead the research.

“I was looking for a medium-scale platform we could use for CReSIS research of polar ice sheets,” Arnold said. “We’re going to perform trade studies and develop a lab prototype to demonstrate how we might incorporate CReSIS radars and antennas systems into the airframe. We’re hoping not only to develop research ideas but also integrate the UAV into the classroom — it’s great for students to have a NASA vehicle here to see and touch and integrate into research and classroom activities.” 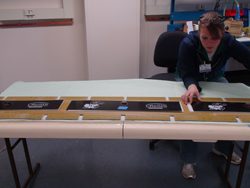 The Viking 400 will arrive by truck from the NASA center in Moffett Field, California, to one of several hangers maintained by KU at the Lawrence Municipal Airport.

According to NASA, the UAV is designed for “precise and accurate data collection missions in remote or dangerous environments. It’s large enough to carry up to 100 pounds of scientific instruments for up to 600 miles yet small enough not to require a large runway or hangar.”

Because the UAV is being sent for research and training of students, KU will not be piloting the aircraft during its stay in Lawrence, expected to be from a few months to up to a year.

“It’s the fuselage, wings and tail,” Arnold said. “We get the entire airframe, but we don’t get the engine because we’re not going to fly it and were not getting its autopilot.”

Arnold and other KU aerospace engineers will focus on assimilating radar systems into the UAV fuselage to measure ice loss in Greenland. The systems include the High Frequency sounder, the Very High Frequency multichannel coherent radar depth sounder/imager and the ultra-wideband microwave radar, referred to as the “snow radar.”

“The goal of the project is to integrate the next-generation compact snow radar and sea ice radar on a NASA UAV for sea ice survey and monitoring,” said Stephen Yan, assistant scientist with CReSIS, who also will conduct research and student training with the Viking 400. “The radars will allow us to collect data on snow thickness and density and sea ice thickness. These data are critical for scientists to develop and validate sea ice models for sea ice prediction and climate change study.”

Fitting complicated electronics on a medium-sized UAV airframe will be the trickiest job for the researchers.

“The biggest challenge is that these systems are typically flown on large, manned aircraft,” Arnold said. “Miniaturizing the antennas that emit the energy — and also the radar, electronics and hardware that generate the energy — will be the hardest part.”

However, Arnold’s research into multifunctional aircraft structure is particularly suited to enabling the Viking 400 to take measurements in the harsh Arctic environment.

“As we integrate large antenna arrays into aircraft, we design the antennas in a pristine environment,” Arnold said. “But on a plane it’s vibrating, shaking, freezing — far from an ideal environment for antenna. My research is at the crossroads between electromagnetics and airframes, two systems with competing requirements and materials. I try to look toward the future of these two systems, where there could be airframe and antenna integration. Why can’t the wing also be the antenna array, or vice versa?”

Arnold said UAVs equipped with miniature sensors could be more effective at obtaining a detailed understanding of ice loss in Greenland.

“CReSIS is gathering data already to allow glaciologists and climatologists to make predications,” she said. “With these UAVs, it opens potential to get finer-scale readings that we don’t have. There are a lot of measurements we could take, especially along the grounding line where you want a fine scale. This vehicle could be the leader in these kinds of measurements.”

Arnold credits Prasad Gogineni, director of CReSIS, with securing the UAV for the project. “He facilitated initial discussions, and we’re very grateful to him for making this connection,” she said.

NASA will receive CAD renderings of the Viking 400 produced by students while the UAV is in Lawrence. “Students will also be generating 3D models of the aircraft that NASA will use for engineering and analysis,” said NASA’s Fladeland.

NASA Ames Research Center is a world leader in all aspects of unmanned aircraft, including autonomy and control technology, safe and effective airspace integration, and airborne science applications.

CReSIS is a Science and Technology Center established by the National Science Foundation in 2005 to develop “new technologies and computer models to measure and predict the response of sea level change to the mass balance of ice sheets in Greenland and Antarctica.”

KU serves as the lead institution for CReSIS.

Photos: At top: a Viking 400 drone. At right: Arnold assembles the antenna array that currently flies on a NASA P-3 as part of their Operation Ice Bridge Campaign.