LAWRENCE — A University of Kansas Foundation Distinguished Professor is scheduled to brief members of Congress later this week on issues related to the integration of immigrants into American society. 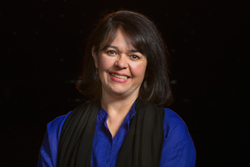 Cecilia Menjívar, an expert on U.S.-bound migration, is a member of the National Academies of Sciences, Engineering and Medicine committee that worked for two years on the report, "The Integration of Immigrants into American Society."

The committee members, who are a panel of experts from some of the nation's top research institutions, will discuss comprehensive data from the report on an integration of immigrants in a multitude of areas, including education, employment and earnings, occupations, poverty, residential integration, language, health, crime and family patterns.

Menjívar is an expert on how laws and the legal context that receive immigrants, particularly from Central America, influences their lives and trajectories in America. Today, 41 million immigrants represent 13.1 percent of the U.S. population, and the U.S.-born children of immigrants represent an additional 12 percent. Together first- and second-generation immigrants account for one-quarter of the county's population.

In the Academies' report — published last September — the committee found immigrants and their descendants are integrating into U.S. society and with the second or third generations resembling other native-born Americans.

"Though we normally associate integration with well-being, as immigrants integrate and their descendants become more like the native-born, we found their well-being declines in areas of health, crime and the percentage of children growing up with two parents," Menjívar said.

The Academies' committee consisted of scholars from around the country in many disciplines, including sociology, political science, psychology, anthropology and economics.

The report addresses a major factor that has changed over the years regarding immigrants and the legal system they face now as opposed to immigrants roughly 100 years ago. The undocumented status, which affects roughly one of every four immigrants, can slow down integration, but it does not fully impede it, Menjívar said.

"One of the concerns the panel identified with relation to integration is the legal statuses that the current system of laws creates, as an undocumented status significantly slows or blocks the integration of not just the undocumented immigrants but also their U.S.-citizen children," she said.

Menjívar has written more than 100 books, articles and book chapters and has received numerous awards and accolades for her books, including "Enduring Violence: Ladina Women's Lives in Guatemala" and "Fragmenting Ties: Salvadoran Immigrant Networks in America."

Menjiívar last fall joined the KU faculty in the Department of Sociology. She is one of 11 KU Foundation Distinguished Professors and is co-leading, with Victor Agadjanian, also a KU Foundation Professor, the new KU Center for Migration Research under the KU Institute for Social Policy & Research. The center will promote and coordinate KU research on causes, types and consequences of human migration at the state, regional, national and global levels.