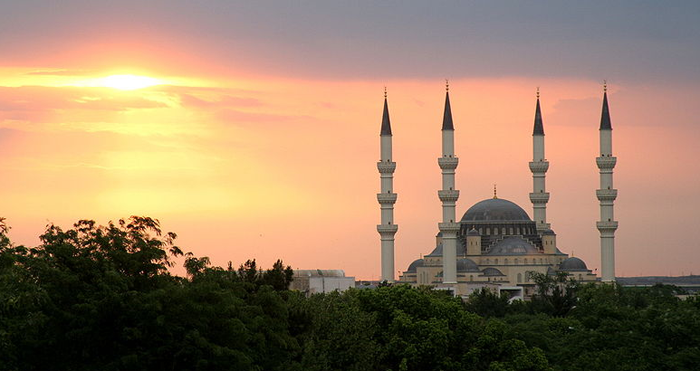 LAWRENCE — In the aftermath of 9/11, much outside attention has focused on the five former Soviet states of Central Asia as sites conducive to Islamic radicalization and possible terrorism, due to the majority Muslim populations in Kyrgyzstan, Kazakhstan, Uzbekistan, Turkmenistan and Tajikistan.

"In the Western mass media the view of what's going on in those societies in terms of Islamic renaissance has been pretty black and white or one-dimensional," said Mariya Omelicheva, University of Kansas associate professor of political science. "All of the focus has been on the threat of radicalization and the possibility that it will be another hot spot where Islamic extremists could come to power."

However, these attitudes misrepresent the situation there and how most Muslim citizens of Central Asian states incorporate religion into their daily lives, said Omelicheva, author of the essay "The Multiple Faces of Islamic Rebirth in Central Asia," published recently in the book "Area Studies in the Global Age: Community, Place, Identity" by Northern Illinois University Press.

"The discourse of a terrorist threat has been used and politicized by regimes in power and by Islamists themselves, but it really misrepresents the situation there," she said. "It exaggerates the threat, and with that, if we overestimate the threat, we displace not only attention but resources. There are also lots of other repercussions of this biased perception of how much of a threat radical Islam poses to states and societies and the states around them."

Authoritarian regimes govern all five of the states, and the rhetoric of portraying Islam as an imminent threat plays into the hands of leaders, allowing them to use it as a way to exhibit soft power and to exert control over the populations, she said.

"It justifies repression and harsh measures against any kind of dissent," Omelicheva said. "But it's also a tool to gain support from Russia, China and the United States because the amount of military support and attention from the world powers has been considerable. It's largely because of this topic of Islam and terrorism, plus the states' proximity to Pakistan, Afghanistan and Iran."

She said in addition to mass media covering the region and governments who deal with the states, academics are at fault for this perception as well.

However, since the 1991 breakup of the Soviet Union, individuals in Central Asian nations have rediscovered their Islamic roots, which have become part of either their ethnic or communal identities.

"It's very much folklarized. It's very much intermingled with cultural rites and traditions," Omelicheva said. "There's this very rich tapestry of Islamic traditions and rituals, something that the official Islamic establishments that go hand-in-hand with the government don't recognize."

The multiple faces of Islam in Central Asia are expressed through practices like pilgrimages to the graves of deceased ancestors or having a variety of saints to pray to, she said.

"There are lots of un-Islamic practices that are Islamicized in the context of those societies," Omelicheva said. "For virtually any community, any subnational group practicing Islam, there will be something unique about the way they practice Islam. There is this very great diversity of Islamic practices and traditions, and those are not necessarily recognized by the central official establishment."

Another aspect concerns doctrinal dimensions, such as theology, and also organizational movements with players who do want Islam to play a more active role in governing the state but typically don't resort to violence.

The essay's main point is to break down what is happening in Central Asia and across the world, particularly in viewing Muslim societies and not stereotyping those who belong to them, Omelicheva said. This is important post-9/11 and in the wake of the recent terrorists attacks in San Bernardino, Paris and Brussels, she said.

"This lens and this kind of mindset is very counterproductive. Research has shown over and over again that repression strengthens the resolve of those who have already committed themselves to the cause. You can push them underground temporarily, but they will re-emerge," Omelicheva said. "But it also radicalizes the ones who've been moderate or mild just because they've been repressed without any good reason for being subjects of this oppression. These kinds of anti-Muslim sentiments are really counterproductive, and this is where the danger lies."

She said a deeper understanding of the depth of Islam in communities in Central Asia and across the world could lead to better knowledge of other societies, pay dividends in diplomatic relations that could hopefully prevent violence and an environment that fosters extremism.