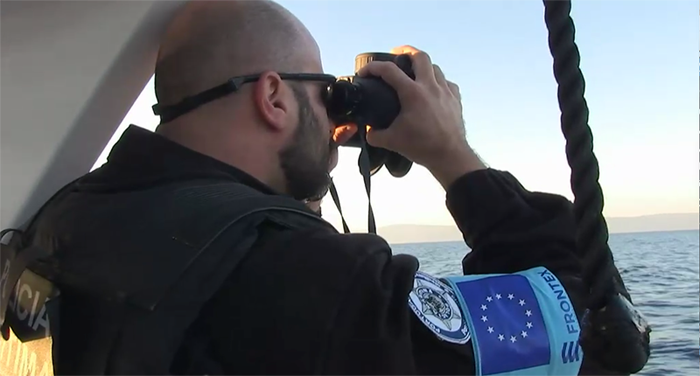 LAWRENCE — As refugees from the Middle East and northern Africa seek to escape war, political unrest, economic distress and other hardships, European nations have struggled to manage the influx of people attempting to cross borders.

In recent months, Germany has played a leading role in trying to take as many refugees as possible, though that has created a number of challenges, including the rise of attitudes of nationalism — there and elsewhere in Europe — amid criticism of the migrants and such demographic changes.

Perhaps it's fitting that Germany is playing such a prominent role in a wave of transnational migration because it was one of the first states to modernize monitoring the waves of people crossing its borders, according to a University of Kansas researcher.

"The emigrant inspection stations along the eastern German borderlands were essentially a pre-screening system to Ellis Island," said Allison Schmidt, a graduate teaching assistant who earned her doctorate in history from KU in May.

As a specialist in the history of migration, Schmidt's dissertation and broader research focuses on the movement and monitoring of migrants from the Habsburg and Russian empires through Germany in the early 1900s, mostly by railroad. Scholars typically have viewed the migrant stations as an economic tool and a way for international shipping companies to pre-screen migrants to check their health and finances before the migrants sought to travel on to the United States.

"I started to realize Germany had a major investment in these migrants as well, and German leaders feared they could become a burden to the state," she said. "I would argue the German state had more of a vested interest than previously thought. This is a window into how states implemented control of migration."

In her research for the project, Schmidt viewed official state reports and documents, including police reports and letters between shipping companies, diplomats and European states. She also examined memoirs of migrants.

German leaders were mostly concerned about the migrants' potential to spread disease or also become public charges, which led them to design the modern system of channels and monitoring the flow of people through its territory. In the early 20th century, roughly 3 million Austro-Hungarians and 2.2 million Russians emigrated through Germany, and the station she studied saw thousands of people come through annually.

"Allison's study helps us to understand migration as a process and not merely in terms of departure and arrival," said Nathan Wood, associate professor of history and adviser of Schmidt's dissertation. "With the current influx of trans-migrants and refugees trying to move across Europe, it is instructive to think about ways states have facilitated or hindered such movement historically.”

In a departure from much of the immigration focus today on nationality or race, Schmidt discovered for officials at the German registration stations she studied, the ethnicity or religion of a migrant was not a primary concern. If religion was noted, it was likely only for culinary or burial purposes.

"It's interesting because the way it's easiest for Americans or the receiving land to describe these migrants was by their language groups, but in Europe at that time, people could speak multiple languages," Schmidt said. "Most of the time they categorize migrants upon the region where they came from. It's interesting that at that point the German province I focus on, Saxony, had quite a reputation for accepting international people. Whereas, today, it has a xenophobic image.”

The records often noted if someone originated from an area where cholera was prevalent, so they functioned more of a public health capacity.

"It was a system set up in order to get people to move through. It was seen as a way to make sure people could get through and would not get lost," Schmidt said.

In a system that was less adversarial in its view of immigrants, states' attitudes have changed in the last century, she said. In 1924, the United States instituted an immigration quota based on the number of immigrants already in the country, so it inhibited migration from states outside western and northern Europe. Ironically, that left Germany with many migrants who were hoping to pass through but instead ended up staying and had to be housed in camps and hostels, similar to the migrants today in Europe seeking to escape Syria and other places.

In the period of Schmidt's research, Germany served as “both a destination and transit space for migrants,” Wood said. “Today, it is mainly a destination for migrants to Europe. The states between the Mediterranean Sea and Germany, such as Greece, Macedonia, Croatia, Hungary, Slovenia and Austria, seem to be struggling with their role as a space of transmigration.”

Studying some of the first modern migration-monitoring systems offers lessons in dealing with the immigration crisis today, no matter where in the world it's occurring, Schmidt said.

"Immigration has been positive overall economically and socially. It's wise also to say there will be issues no matter what. There will be problems when people in come and move and cause change," she said. "It also depends on how they are taken in within a society and how they should be integrated. First of all, it's most helpful to inherently stop hating migration as a worst-case, apocalyptic end-of-days scenario. Historically, people have always moved. Secondly, if migrants are able to feel welcome and don't feel any type of humiliation on the street, that is better for integration and all in the long run."

Schmidt, as a graduate student, has received numerous grants and fellowships for her work, including two Fulbright awards and participation in a National Endowment for the Humanities workshop at Columbia University in 2014. She has accepted a postdoctoral fellowship at the German Historical Institute in Washington, D.C.

The University of Kansas is also an emerging leader in interdisciplinary research and scholarship of the study of global migration, including the 2015 founding of the KU Center for Migration Research under the KU Institute for Social Policy & Research.

Photo: A European Union coast guard officer is on duty on Dec. 15, 2015, in the Mediterranean Sea around Greece. The EU and its affiliate countries are actively working to manage the flow of refugees from Northern Africa and the Middle East. KU researchers Allison Schmidt and Nathan Wood examine the connections among the original migration checkpoints in Germany in the early 1900s and today’s migration crisis in Europe. Photo courtesy the European Union Newsroom.