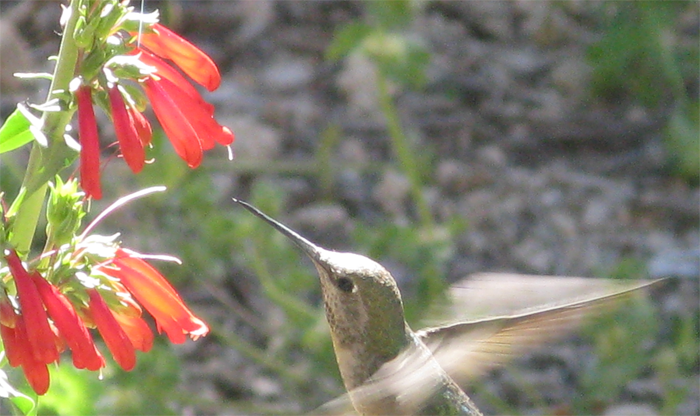 LAWRENCE — The flowers that blossom in a multitude of shapes and colors all over our planet serve as an astonishing demonstration of Earth’s biological diversity.

In part, this beautiful variety comes from flowers’ co-evolution with pollinators — like bees, moths, butterflies and hummingbirds — whose travel from bloom to bloom enables cross-pollination.

Today, with a pair of grants from the National Science Foundation together totaling $2.5 million, a researcher at the University of Kansas is investigating how natural selection has enabled flowers to shift strategies from bee-pollination to hummingbird pollination, contributing to this stunning diversity in flower form.

Lena Hileman, professor of ecology and evolutionary biology, believes her work will shed light on how plant communities are shaped by evolutionary, ecological and genetic forces. Through her work, she aims to discover the extent to which evolutionary change is predictable. 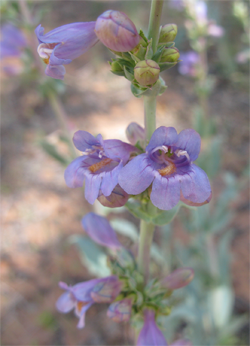 “We’re studying Penstemon, a genus commonly known as ‘beardtongues,’ to understand what shapes diversity in flowers,” Hileman said. “The really exciting thing about Penstemon that makes it perfect to study flower diversity is that among the nearly 300 species, there have been many shifts in ‘pollination syndrome,’ or the kinds of creatures that visit flowers for pollination.”

Hileman said that most species of Penstemon are pollinated by bees, but many are pollinated by hummingbirds, and the different flowers show stereotypical bee- or hummingbird-adaptation. With KU postdoctoral fellow Carolyn Wessinger, she’s testing whether Penstemon has reached an evolutionary equilibrium in the relative frequencies of bee and hummingbird pollination strategies.

Hileman said flowers in Penstemon have adapted from bee to hummingbird pollination more than 10 times. She described the substantial differences in flowers specialized for both forms of pollination.

“For a flower that’s adapted to bee pollination, in Penstemon, they’re generally bluish to purple in color, have wide corolla, or petal tube, that allow bees to enter the flower and receive a nectar reward,” Hileman said. “The stamen are positioned to deposit pollen on backs of bees."

By contrast, she said hummingbird-pollinated species are red or orange-red and specialized with a narrow corolla because only the beak and tongue of the birds enter the flower. 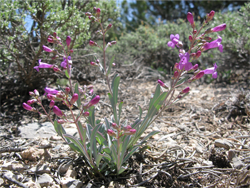 “A hummingbird-pollinated flower’s reproductive organs stick far outside a flower to contact the bird’s head, and there’s no landing platform because the bird hovers,” Hileman said.

She added that hummingbird-adapted flowers produce a larger nectar reward, suitable for those birds. 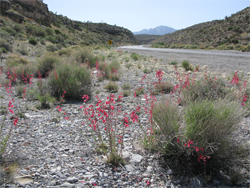 With a Dimensions of Biodiversity grant from NSF’s Division of Environmental Biology, Hileman and her colleagues, including a Duke University collaborator, will test why hummingbird-adapted flowers evolve from bee-adapted flowers, but not the reverse. For example, evolutionary patterns might be shaped by the genetics that underlie how these flowers develop.

“The genetic architecture of the flower is modified when a pollinator shift happens. We’re testing hypotheses that the types of changes from bee to humming pollination involve a loss of gene function,” Hileman said. “So, if a broken gene is adaptive for the evolution of hummingbird pollination, once broken it’s likely really hard to fix it, limiting reverse-evolution to bee pollination.”

With an additional grant from NSF’s Division of Integrative Organismal Systems, Hileman and her collaborators are investigating whether the same genes are responsible for the many independent origins of hummingbird-adapted flowers from bee-adapted flowers in Penstemon. This work will help biologists better understand the predictability of genetic changes during the evolution of diverse forms in nature.

Hileman said these genetic drivers for differences in pollination strategies for flowers like Penstemon are what underlie their beauty and incredible variety, evident everywhere in the natural world.

“One of the most amazing aspects of biodiversity is flower diversity,” she said. “We can all appreciate that if we go outside and walk in the woods or garden. There’s a vast array of shapes and forms of flowers. This comes from a long history of interaction with pollinators that shape those flowers — wind, butterflies, moths, bees or birds like hummingbirds.”