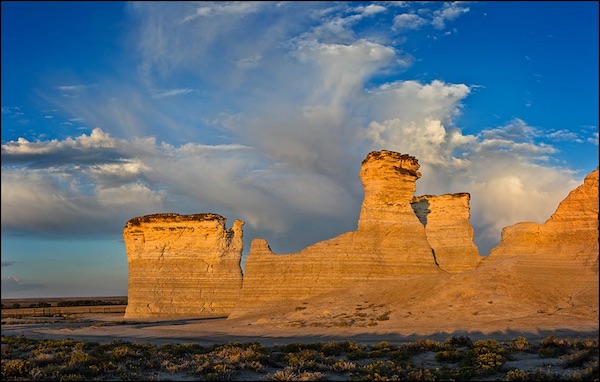 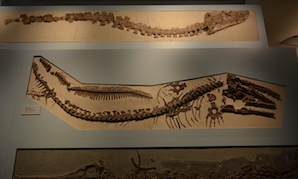 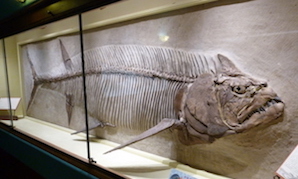 LAWRENCE — If you stroll the halls of a natural history museum anywhere in the world and come face-to-face with the prehistoric fossil of a pterodactyl or mosasaur, the odds are good it was unearthed in Kansas.

Indeed, American paleontology came of age in the 19th century largely thanks to Kansas’ chalky earth — made famous by the University of Kansas’ “Rock Chalk Chant.” The fine-grained chalk, especially good at preserving fossils, was ocean floor during the Late Cretaceous, from 65 to 100 million years ago, when much of Kansas was beneath the Western Interior Seaway.

“That ocean ran all the way from present-day Gulf of Mexico to northern Canada, through the middle part of this country,” said Bruce Lieberman, senior curator at the KU Natural History Museum, which houses one of the world’s foremost collections of Late Cretaceous fossils. “The water would have been warm and tropical, no deeper than 200 meters at its deepest point.”

The KU researcher said the seaway and its shoreline abounded with ancient marine life such as diving birds, winged and swimming reptiles, fish, clams, and ancient squid relatives called ammonites.

“It’d have been a great place to swim, except there were giant mosasaurs and sharks that would have loved to eat a human,” Lieberman said.

While many fossil treasures from the Western Interior Seaway adorn museums, today many thousands more are stored in the back rooms of various research institutions, inaccessible to most people.

“We have all kinds of fossils in these museums, but too many are buried away in drawers and cabinets that make them inaccessible to scientists and the public,” said Lieberman. “We think digitization of these fossils has value for answering scientific questions.”

For instance, a warming climate during the Late Cretaceous is similar to conditions climate scientists expected Earth to undergo in coming centuries. So the comprehensive view offered by digitizing Late Cretaceous fossils could forecast how species may react to altered habitats.

“We’re going to use computer mapping called ‘ecological niche modeling’ to look at how species were competing with one another — when you pack more species in more tightly, theoretically they’re going to be competing more with each other, which could drive more extinctions,” said Lieberman. “We’d like to see how species adjust their range. Do they partition their range to avoid overlapping as much as possible? This has practical applications because people get food from oceans. We’re predicting as climate gets warmer it’ll cause lots of extinctions. But we’re wondering if we should expect increased competition as well.”

Not only will the digitization work make the Western Interior Seaway fossils more useful to scientists, but the grant will open up access to the fossil treasures for the public at large.

“We’re going to be creating images and providing information about where fossils come from,” Lieberman said. “The public can look at the same resources as a museum researcher, to expand science out to the public more.”

The public outreach will center on a new “Digital Encyclopedia of Ancient Life” intended as an open-access textbook of paleontology. The atlas will feature an online Cretaceous Atlas with at least 800 species from the Western Interior Seaway to be added to the existing Digital Atlas of Ancient Life for the web and an iPhone app.

In addition to open-access resources, the researchers will develop K-12 curricular materials from the digitization project as well as providing 3-D scans of the fossils and 3-D models for some classrooms. Additionally, exhibitions based on the grant work are planned at the associated institutions.

Lieberman said the work would involve at least 13 undergraduates and 4 graduate students with the intention of recruiting students from underrepresented groups.

Along with Lieberman, KU Biodiversity Institute faculty working on the grant include Chris Beard and Jim Beach.

Indeed, KU has been at the forefront of digitizing fossils in the 21st century — in the same way that Kansas, thanks to its chalk, was the hotbed of paleontological fieldwork in the 19th century.

“I’ve always thought it was cool that our KU ‘Rock Chalk Chant’ ultimately goes back to rocks in Kansas where some of these awesome fossils were discovered,” said Lieberman. “When people today are chanting ‘Rock Chalk’ they’re probably not thinking of these fossils — but when I hear the chant, I think of fossils.”