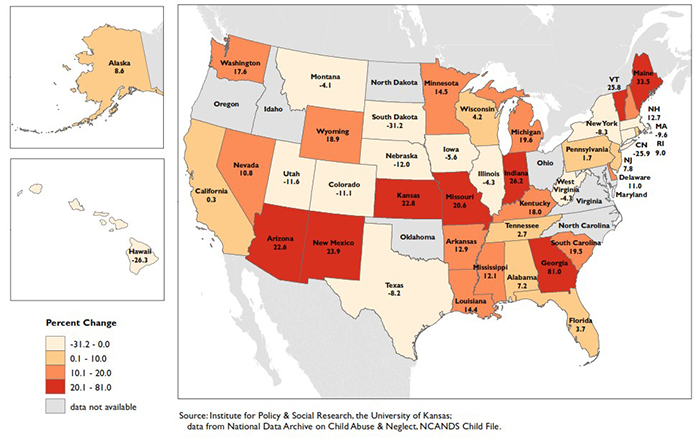 LAWRENCE — University of Kansas researchers have received a grant to determine how economic and social safety net policies affect child neglect across the United States and create a tool policy makers and practitioners can use to predict how proposed prevention strategies can address child abuse and neglect.

Michelle Johnson-Motoyama, associate professor of social welfare, and Donna Ginther, professor of economics and director of KU's Center for Science, Technology & Economic Policy, will lead the three-year, $1.05 million grant from the Centers for Disease Control. The KU Institute for Policy & Social Research assisted with the development of the grant proposal and will manage the CDC award. The project will study the various changes to economic and social safety net policies by state from 1995 until 2014 — the most recent year for which data is available — and if those changes affect state-level changes in child neglect rates.

Since the Great Recession started in the late 2000s, rates of child abuse and neglect did not change significantly, an unexpected result as economic downturns often lead to increases in child neglect. There are numerous reasons why economic and policy changes can affect these rates, and the researchers plan to take a closer look at those factors while considering other variables such as demographic data and changes in child maltreatment laws.

“When we looked at the national data and saw there was very little change, I thought ‘that’s surprising’ and took a look at state data, which revealed a great deal of variation,” Johnson-Motoyama said. “We want to understand how these policies affect different populations differently and to see how policy can be used as a lever for prevention.”

The researchers are examining data starting in 1995 because the Personal Responsibility and Work Opportunity Reconciliation Act of 1996, or “welfare reform,” made significant changes to state policies possible. The reform made Temporary Assistance for Needy Families, known as TANF, in effect a block grant, which allowed states to distribute it in various ways. They will investigate the associations between official reports of child neglect and changes in multiple programs such as TANF, Earned Income Tax Credits, the Supplemental Nutrition Assistance Programs, known as SNAP; minimum wage; sales taxes; Women Infants and Children, or WIC; child care and pre-kindergarten policies, and publicly funded health insurance policies.

Johnson-Motoyama and Ginther will focus on how changes to policy specifically influenced changes in rates of child neglect based on children’s age, race/ethnicity and gender. The multiphase study will draw data from an integrated, longitudinal database, which investigators are creating. Preliminary data shows states have had wildly different success rates of child maltreatment victimization over the course of the Great Recession. For example, between 2009 and 2013, South Dakota reduced its rate by 31.2 percent, while Georgia’s rate increased by 81 percent.

By examining data over a nearly 20-year period, researchers can control for influences such as policies that changed the definition of child neglect, changes in mandatory reporting laws and instances such as high-profile cases such as a child fatality that often cause a spike in referrals.

Once their analysis is complete they will share the findings in several ways. First, they plan to author a series of papers for publication in peer-reviewed journals and presentation at national and international conferences. Then they will author policy briefs aimed at policy makers and social work practitioners illustrating the outcomes various policy changes have on citizens. The briefs will be distributed through the University of Kansas Institute for Policy and Social Research.

Finally, the researchers will develop and test a new platform for estimating how changes in economic and social safety net policies influence child neglect rates. One example of the platform’s use is that, if reductions in TANF caseloads are shown to increase entries of children into foster care due to neglect, the platform could estimate the costs and benefits of supporting families through TANF to those of foster care.

Above all, the goal is for the platform to help people estimate effects to children and families before the changes are made.

“It will give people a resource they don’t currently have,” Johnson-Motoyama said. “Policy makers, advocates and people who work with families will be better able to predict the fiscal and human costs of policy decisions. It will help policy makers and practitioners conduct cost-benefit analyses and make evidence-informed decisions.”