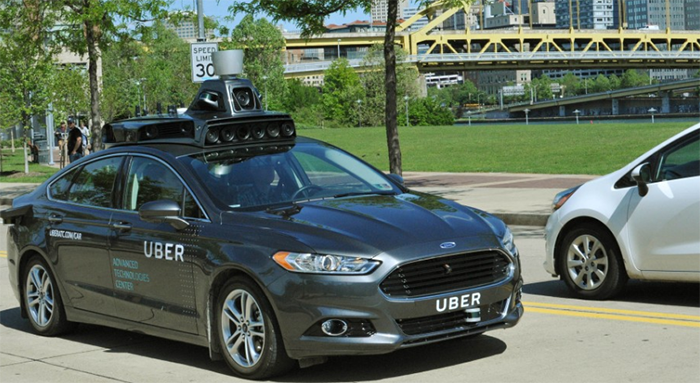 LAWRENCE — The media hype surrounding Uber conducting tests of driverless ride-share vehicles in Pittsburgh made it seem like the future arrived sooner than most people expected.

But a University of Kansas researcher of transportation policy says the tests are far from what most people visualize with driverless vehicles. For one, according to media reports, typically two Uber employees sat in the front seat of the car during the trips.

"Vehicle automation technology is developing fast, but as it develops, new issues with technology deployment and integration with the existing vehicle fleet also arise," said Bradley Lane, assistant professor in the School of Public Affairs and Administration.

Lane's research focuses on travel behavior, policy and planning issues in urban transportation. He has authored or co-authored studies on government promotion of electric vehicles, how gasoline prices influence public transit and purchasing trends of plug-in electric vehicles among other topics.

Q: Are you surprised that Uber is testing these vehicles so soon basically before any laws have been written?

Lane: Yes, and no. I think much of the news coverage oversells a little how soon it is happening. This is still just a demonstration project with human backup drivers on board. The cars still can’t handle normal traffic flow above speed limits, or make right turns on red, or the quirks of local driving laws and conventions, such as the example of left turns at signals identified in Pittsburgh.

We’re still a long way from seeing any kind of market penetration of a vehicle that looks like any other vehicle that you can get in, push a button, then sit back and open a beer and watch movies while it drives you from Lawrence to Wichita – which is what I think much of public imagines when they think of autonomous cars.

Q: What will be the key things to watch going forward?

Lane: Insurance and liability issues remain largely unaddressed, as does how citations and traffic violations will be dealt with. Two other things that immediately jump out at me are the consumer acceptability of this vehicle technology and the operation of the vehicle without some kind of backup. With consumers, I wonder how freely how many will give up the control of driving. Will the autonomous cars be full-time, or can you switch it on and off? Do I have to buy a new car, or is this apparatus something I can just attach to a car I already have? And how acceptable is the autonomous apparatus, which in the pictures in the article was a pretty large and clumsy-looking attachment to the roof?

With the backup, notice that the Uber deployment had a backup driver that could take over when the automated driving system got stuck. How will the final form of autonomous vehicles interface with the driver? Will the driver be able to take control of the vehicle in certain situations? How will the driver know to? What happens if the driver doesn’t take control? What if the driver wants to take control and the vehicle won’t disengage the automated driving system? Will this interface be consistent across vehicle models and makes? There just remain so many unaddressed questions and components of the deployment and user interface with this technology.

To arrange an interview with Lane, contact George Diepenbrock at 785-864-8853 or gdiepenbrock@ku.edu.