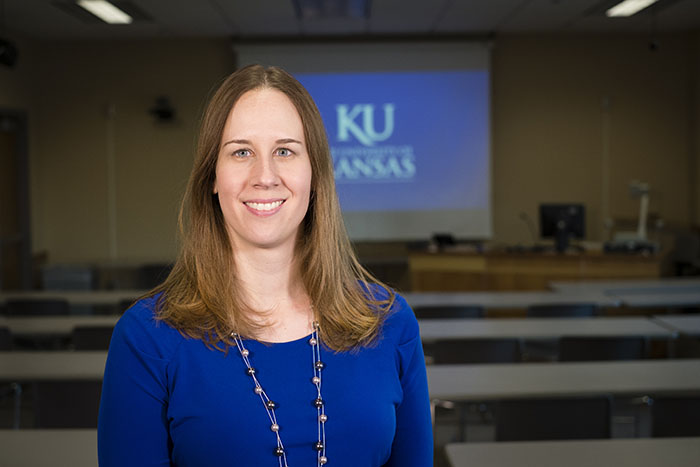 LAWRENCE — Nearly everyone has said or heard someone else say things like “I’m not good at math” or “I’ve never been a creative person.” But what does it mean if teachers have similar beliefs about their own students’ abilities in various subjects? A University of Kansas professor has authored a study to gauge teachers’ beliefs about student intelligence, ability and effort and how they can influence teaching.

The study surveyed more than 125 pre-service and practicing teachers. Researchers found that teachers felt ability was the most important factor in the arts, while effort was most important in the humanities. They also explored what teachers felt about the importance of educators, student and family factors in a child’s ability to learn. Meagan Patterson, associate professor of educational psychology, wrote the study with Natasha Kravchenko, Li Chen-Bouck and Jenna Kelley. It is published in the journal Teaching and Teacher Education.

Mindsets are a popular topic in education, with questions often addressing if intelligence and abilities are fixed or can grow. The idea of a growth mindset, or that abilities are not fixed and that minds are flexible and capable of great improvement, is often promoted for students. Patterson and colleagues wanted to find out what pre-service and practicing teachers believed.

“In particular, we wanted to know ‘are teachers’ beliefs different across different academic domains?’” Patterson said. “In the arts, at least anecdotally, people seem to have that mindset of either you have it or you don’t. People often say things like ‘I’m just not a creative person.’”

Overall, the future and practicing educators indicated they believe in growth mindsets, that students can always improve. However, there was variation in the findings across subjects. Respondents indicated they felt ability was more important than effort in the arts, while they felt the opposite was true in sciences, or the so-called STEM fields. They reported believing effort was the most important in the humanities.

The survey also assessed teachers’ beliefs about factors on learning in three areas:

Those who tended to have more of a fixed intelligence mindset reported believing that teacher factors were less important.

“Overall, however, across pre-service and practicing teachers, they tended to view the teacher as the most important factor in a student’s education,” Patterson said.

The findings are important as beliefs often influence practices. If teachers believe that some people will not be able to succeed in math, for example, they may not try as hard to reach struggling students. The research showed that teachers with fixed views of intelligence tend to react with sympathy instead of encouragement when students struggle in math, Patterson said, or calling on a student less or giving them easier tasks as opposed to those with a growth mindset.

Teacher preparation programs should consider teacher beliefs and address mindsets before future educators begin their careers to help avoid reinforcing negative ideas among students, especially in an era when there are shortages of girls and young women in the STEM fields, Patterson said.

“Often teachers are not confident in their own abilities in a given field. Saying ‘I was never good at math’ can send a bad message to students,” Patterson said. “But saying ‘I struggled, but I was able to figure it out’ sends a much different message about the ability to learn.”

The findings also suggest perhaps designers of teacher interventions consider working with teachers who exhibit fixed mindset beliefs to ensure they are encouraging students to achieve to their potential. Previous research has shown that attributing student performance to factors outside of a teacher’s control can lead to less effective practices. Teacher turnover and burnout are also problems in education. The finding that those with fixed intelligence mindsets view the teacher as a less important factor in education than their peers speaks to the importance of preparing teachers who feel they can reach students before they become burned out in the field or send negative messages to students.

“One of those things that always seems to have an impact with teachers is efficacy. The idea of, ‘Can I make a difference?’” Patterson said. “Those kind of messages can impact how students think about a field and how likely they are to persist when they encounter challenges.”