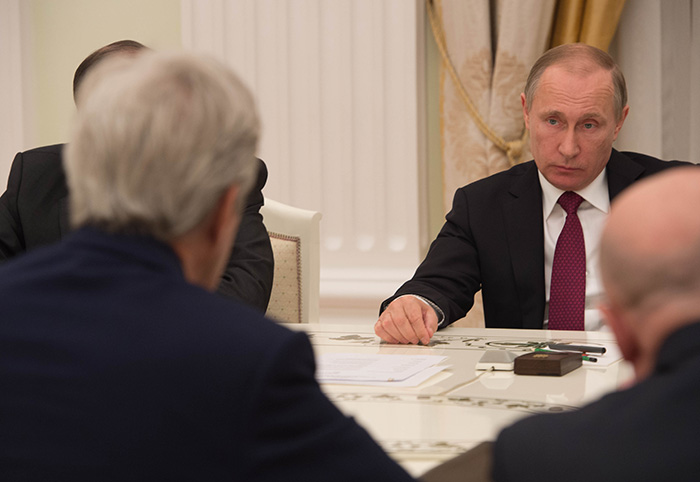 LAWRENCE — As Vladimir Putin recently withdrew from a landmark nuclear agreement, policymakers and media pointed it out as the latest sign of deterioration of Russian relations with the United States.

This follows the 2014 Russian annexation of Crimea and subsequent support of rebels fighting against Ukraine as well as the 2008 military operation in Georgia.

Amid the criticism for Putin's actions, some foreign policy scholars have argued that territorial expansion or even imperialism is in Russia's DNA, but a University of Kansas researcher who examines international relations says recent hard and soft power projections in Russia tell a different story.

"We need to dig deeper into Russia's own views of international politics in order to understand its foreign policy actions and decisions," said Mariya Omelicheva, associate professor of political science.

As author of the recent article published in the journal International Politics, Omelicheva illuminated important differences in the ways Russian leadership views the world, how it defines threats to national and international security, and its views of international actors and its national identity.

"In a way, Russia feels threatened by the United States, but that's only part of the story," she said. "Another part is that Russia also feels an obligation or responsibility to act as a great power and the last final guardian of traditional values believed to be forsaken by the West."

Key points to consider are that Russia's foreign policy decisions that seem completely irrational to an outsider are perfectly rational from the Kremlin's point of view. Russia's rationality, however, has its own internal logic, she said.

"Russia scrapping its plutonium agreement with the United States is a case in point. It makes little sense given the wittingly unacceptable conditions that Moscow set for renewing the nuclear deal, including the reduction of the American forces in NATO countries near Russia's border, abrogating all sanctions against Russia and even compensating Moscow for losses resulting from those sanctions," Omelicheva said. "The gesture is largely symbolic and was designed to bring Russia in the limelight of world attention as a nuclear great power capable of influencing developments in the international state."

Another is the influence of the Russian Orthodox Church and its commitment to traditional values — as well as a supporter of Russian civilization, a largely constructed entity extending beyond Russia to include all peoples identifying with Russia through language, history, religion or values.

"In a way it's a symbiotic relationship," Omelicheva said. "The Russian state both empowers the church, but it also uses the church to promote its interests domestically and abroad."

To protect these geopolitical views, Putin primarily has exerted used hard power — military involvement in Ukraine or restricting in Russia how Western organizations can operate — and soft power — relying on the symbolism of its political actions, like abrogation of the nuclear deal and seeing the Russian Orthodox Church expand into Europe, among others.

Omelicheva said she hoped her study would help enlighten discussions around U.S.-Russian relations and Russia's actions internationally, especially now when politicians and pundits debate the effectiveness of sanctions on Russia’s foreign policy conduct and international responses to Moscow’s military operation in Syria.

Photo: Russian President Vladimir Putin meets with Secretary of State John Kerry during a bilateral meeting focused on Syria and Ukraine on March 24, 2016, in Moscow. Photo via U.S. government, Wikicommons.