LAWRENCE — A study appearing this week from researchers based at the University of Kansas suggests the United States tends to carry out secret military operations against other democratic countries of the world — but to conduct open war against non-democracies.

The findings appear in the Journal of Conflict Resolution. 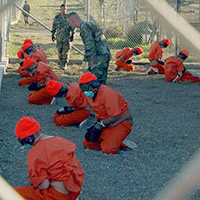 “The more we like your democracy, the more we have to hide the fact that we’re detaining you,” Crandall said. “If you’re from Canada, we hide you in detention in Afghanistan. But if you’re from Yemen, we put you in Guantanamo and post your picture on a Pentagon website.”

Crandall’s co-authors are Owen Cox from KU’s Center for Public Partnerships & Research, Mariya Omelicheva from KU’s Department of Political Science and Ryan Beasley of the University of St. Andrews in Scotland.

The researchers used the Correlates of War Project to define overt occurrences of militarized international disputes involving the U.S., ranging from threats of force to outright warfare, and the Polity IV data set to gauge levels of democracy in the other nations involved. For secret U.S. warfare, the team developed a custom database of U.S.-involved covert military operations from 1949 to 2000.

“We found every covert war we could get information about, through historical books and experts in international relations — and our reviewers gave us a few more,” Crandall said.

In explaining the difference in U.S. forcible actions against democracies and non-democracies, Crandall and his team point to the “Perceptual Theory of Legitimacy” proposed by Austrian-born KU social psychologist Fritz Heider in the mid-20th century.

“It suggests good things should happen to good people, and bad things should happen to bad people — and a mismatch hurts our sense of a government’s legitimacy,” Crandall said. “If criminals go free or heroes are punished, then people don’t trust the government. And the same is true of countries. If Americans know a country is a democracy, they think it’s an ally — because democracies are good and we’re trained to think that. But sometimes American interests might be inconsistent with that. America might want to go to war with a country that’s a democracy.”

In military action, the researchers found the U.S. bent toward clandestine actions against democracies and open wars against non-democracies held true for both Democratic and Republican administrations.  The authors chalk it up to what they dub the “clandestine hypothesis” and argue democratic states employ covert force against each other, “precisely because they desist from engaging in the open military hostilities and war with one another, as the overt use of force hurts legitimacy of democratic governments.”

“People running these wars and covert actions are serious, experienced and thoughtful,” Crandall said. “The presidents and their staffs are very politically astute. I don’t think it’s just happenstance or unconscious motives. I think they know what public reaction would be to such a conflict or arrest.”

To assess the detainment of prisoners between 2001-2006, the researchers used data provided by the U.S. Department of Defense about Guantanamo Bay detainees and conducted original research about the nation’s secret detainees using reports from Human Rights Watch, Amnesty International, the American Civil Liberties Union, the Center for Human Rights and Global Justice and New York University, as well as information published by the magazine Mother Jones and the books “Guantanamo Files” and “Ghost Plane.”

“You might say arresting people in war on terror is similar to how we go to war, but applied to a single individual,” Crandall said. “We found that the more democratic the country where you come from is, if you’re picked up by Americans, then the higher the odds are you’ll get sent to secret dark sites. If you come from an open democracy, you are, ironically, more likely to get secret detention.”

“It’s very statistically robust — even if we only got a hold of a portion of the detainees that were secretly rendered,” he said.

The researchers concluded the actions of the U.S. government in war and detainment result from the competing interests of its leaders’ “perceived national interests” and “democratic values.”

Omelicheva said although the researchers reached their conclusion largely by analyzing evidence of U.S. conduct, this behavior is not unique to the U.S.

“Other Western liberal democracies have provided direct and indirect support of covert operations against other democracies,” she said.

The study contains numerous empirical examples of the covert operations conducted by the U.S. and other democratic states in addition to statistical and experimental analyses.

According to the authors, “When elite actors wish to pursue a policy at odds with the democratic peace, to preserve their legitimacy they engage in hostilities clandestinely.”

Photos, from top: A naval officer signals to an E/A-18G Growler aircraft assigned to Electronic Attack Squadron (VAQ) 130 on the flight deck of the aircraft carrier USS Dwight D. Eisenhower in the Atlantic Ocean. Eisenhower was underway preparing for an upcoming scheduled deployment. At right: Detainees in orange jumpsuits sit in a holding area under the watchful eyes of military police at Camp X-Ray at Naval Base Guantanamo Bay, Cuba, during in-processing to the temporary detention facility on Jan. 11, 2002. Images via U.S. Navy.