LAWRENCE — A University of Kansas professor of social welfare and pioneer in the field has published a new edition of her widely used textbook for social workers and received one of the highest honors the profession offers. Rosemary Chapin, professor of social work at KU, has authored the fourth edition of Social Policy for Effective Practice: A Strengths Approach, and she was recently named a National Association of Social Workers Pioneer.

The book is designed to guide aspiring social workers so that they understand how social policy affects their practice and to equip them with tools necessary to analyze and develop policy. Chapin will travel to Washington, D.C., later this month to receive the award for her groundbreaking scholarship and advocacy initiatives. NASW is the major professional organization, active at both the national and state level, and works to amplify the social work voice in support of policies and practices vital to meeting the needs of vulnerable populations.

Chapin worked as a policy analyst for the Minnesota Department of Human Services early in her career and helped institute long-term care reform. In that role, she saw first-hand how policies determined what services vulnerable populations received and the role that research played in the process. She became determined to change the way social policy was taught in schools of social work so that students were better equipped to understand and develop social policies. She brought that commitment with her to KU when she became a professor in the School of Social Welfare in 1989. Here she founded and directs the Center for Research on Aging and Disability Options, and she has completed funded research projects on the local, state and federal level that total more than $12 million. 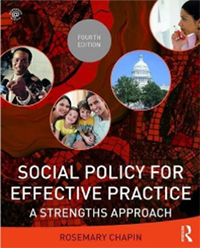 She taught social policy at the bachelor’s, master’s and doctoral levels and distilled her experience into a book that applies the Strengths Perspective to policy practice. The Strengths Perspective is an approach developed at KU that focuses on an individual’s strengths, capabilities and resources when addressing problems instead of focusing primarily on peoples’ deficiencies and deficits. The text is widely used in foundation policy courses — classes that all bachelor’s and master’s students in social work are required to take — across the country. It focuses on how researchers, social welfare practitioners and policy makers can work together to develop informed policy that has positive effects on aging and vulnerable populations, including older adults, all while focusing on the strengths and capacity of individuals and communities.

“The whole theme of the book is social justice. It emphasizes ways to lessen income and economic inequality as well as health disparities,” Chapin said. “It looks at how you truly help people and communities build capacity. It’s about moving from a welfare state to a capacity-building state.”

The NASW Pioneer Award recognizes Chapin’s work on the book and its influence on new generations of social welfare providers as well as her research and advocacy. KU’s Center for Research on Aging and Disability Options is one of the longest continuously funded gerontological research centers in a School of Social Welfare in the United States. The majority of Chapin’s research has focused on how to help individuals avoid hospitalization and institutionalization and remain in their homes when possible. Among her projects was a ground-breaking five-year, longitudinal study to determine if Medicaid programs designed to help low-income, elderly and individuals with disabilities remain in their homes were cost-effective.

“I found that, yes, in fact, they were. That was one of the only studies like that in the United States at the time, and it’s been the basis for much of my other work, as well as reform efforts in other states as well,” Chapin said.

She has also been involved in developing programs such as peer support for older adults, a strengths-based approach in which volunteers help older adults with disabilities set and achieve goals that help them remain in their homes. It was shown to be effective in helping older adults fight depression and was also used with people at high risk of readmission to hospitals. She also piloted a program to expedite Medicaid services, showing that when individuals were able to begin receiving home services within a week of Medicaid application they often could avoid admission to a nursing home or could drastically reduce their stay time and return to their homes.

Chapin was among the first to begin researching physical and mental health care in relation to the aging Baby Boom generation at the state level, increasing the understanding of the care challenges as well as the potential resources this new generation of older adults will create for Kansas. In addition to the fourth edition of Social Policy for Effective Practice: A Strengths Approach, she has authored more than 130 peer-reviewed articles, books, book chapters, research and legislative reports. She is active in the social policy arena, as a member of the AARP National Policy Council, a body that develops and makes policy recommendations to AARP’s board of directors, and earlier this year was honored for her work to reform state policy by the national organization Influencing Social Policy.