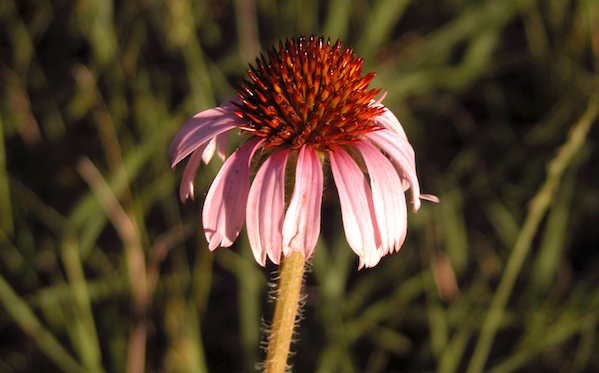 LAWRENCE — In February 1805, during their Corps of Discovery Expedition, Meriwether Lewis and William Clark encountered a purplish daisy prized by tribes of Native Americans across the Great Plains as a “cure-all.” Learning the plant was used to treat bites from “mad Dogs [and] Snakes,” the explorers sent a specimen off to Thomas Jefferson, president of the United States and part-time botanist.

Today, we know that same plant as Echinacea, one of the most popular medicinal plants in the U.S. and Europe due to its ability to fight colds and flu and boost the human immune system.

A recently published book co-authored and edited by Kelly Kindscher, senior scientist at the Kansas Biological Survey and professor of environmental studies at the University of Kansas, explores "everything known" about the purple coneflower.

Written for both popular and academic readers, “Echinacea — Herbal Medicine with a Wild History” (Springer) explores the botanical’s natural history and how it’s been grown, conserved and used.

According to the KU researcher, Echinacea is still underappreciated in the U.S. Kindscher points out the immune-boosting plant was shown in a recent European clinical trial to be as effective and safer than the prescription medicine Tamiflu.

“Most of the good research on Echinacea comes from researchers in Europe even though this is native to North America,” he said. “In the U.S., we don’t have in interest in integrative medicine, we just use pharmaceuticals. In Germany, you’d find Echinacea behind the counter at the pharmacy. Here in the U.S., you’ll find it up front with Coke and Pampers, not behind the counter.”

The KU researcher lamented that U.S. medical professionals are unlikely to recommend Echinacea or other time-tested botanical health products to patients, instead opting for pharmaceuticals that often can cost more and hold higher risk of side-effects.

“Here’s the problem with herbal products — you can talk about them, but doctors can’t prescribe them as medicine,” Kindscher said. “One can go online and elsewhere and find a lot of good herbal products, (and some bad ones, too). Echinacea is a good one and best as a tincture — an alcohol and water extract — available in health food stores and pharmacies up front. Another clinical trial that came out a few years ago showed people who consume these extracts before, during and after long-distance flights were statistically less likely to get upper respiratory tract infections, or what we call a cold. Clinical trials — we consider them the gold standard that doctors and medical professionals consider proof.”

But most doctors don’t learn about herbal product in medical school.

“Data shows doctors often pick medicines shown to them by pharmaceutical reps,” he said. “It’s not easy for doctors to keep up on all medical literature — it’s so voluminous — but primarily there’s not a huge industry urging doctors to prescribe Echinacea.”

Beyond advocating for Echinacea in human health, Kindscher’s new book on the purple coneflower reflects a career spent studying a genus that is native to Kansas.

“Echinacea has been that group of species that I’ve focused on most of my adult life, including my first published paper as an academic in 1986,” he said. “I’ve been able to pull together everything that’s known about that group of plants in a nice overview. I feel fortunate that I’ve been able to work on this over a period of time and see what are the most important things to know about this interesting medicinal plant that has its roots in Kansas, literally.”

Indeed, the KU researcher said most wild-harvested Echinacea root used for medicine historically grows in western Kansas, especially in “post-rock country” north of Hays. He said there was cause for worry about the health of Echinacea populations in the state and across the Great Plains.

“Millions of dollars of Echinacea roots have been harvested from native prairies and pastures,” said Kindscher. “I’ve documented there’ve been millions of plants dug out by ‘diggers’ — wild harvesters who want to make some money on the side. If you go on the Internet you can find brokers selling Echinacea roots. We found out from harvesters themselves that about 50 percent of those plants actually re-sprouted and grew back. We know the plant produces a lot of seeds, so we found out that moderate harvesting isn’t decimating the populations. The bigger threats are conversions of range lands to agricultural use, herbicide and development.”

Photo: The medicinal plant Echinacea in flower in its native prairie habitat in the Smoky Hill River breaks, north of Hays. Photo by Kelly Kindscher