LAWRENCE — Electronic cigarettes have gained rapidly in popularity in recent years, with vaping stores popping up in cities across the country and advertisements touting them as a good-tasting way to quit smoking traditional cigarettes. A University of Kansas study has found that e-cigarette ads are just as appealing to both smokers and nonsmokers and that adolescents’ brains react similarly to those who smoke when viewing them. 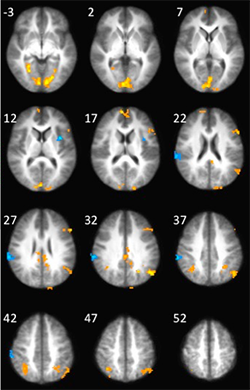 “You can still see e-cigarette ads on TV, but interestingly, you can’t see traditional cigarette ads,” said Yvonnes Chen, associate professor of journalism at KU and one of the study’s co-authors. “The idea that adolescents who try e-cigarettes intend to try traditional tobacco products within a year has been supported by evidence. I think the findings really shine a light on what e-cigarette advertisers are doing to our adolescents.”

While adolescents are highly targeted by the e-cigarette industry, there has been little research into their behavioral and neural reactions to the advertising. Researchers conducted two experiments. In the first, adult traditional cigarette smokers and nonsmokers answered questions about e-cigarette and neutral advertising images. The 40 e-cigarette ads that respondents said most increased their desire to use the product were matched with 40 similar neutral advertising images. In the second experiment, the 40 ads and neutral images were shown to adolescents during an MRI brain scan. The 30 young people, ages 14 to 21, pre-reported their smoking status, ranging from some using tobacco every day to others who had never smoked.

Research has shown that smokers often report a desire to smoke after seeing images of objects similar to cigarettes, such as pens, hence the decision to show respondents ads and neutral images. Most of the respondents were nonsmokers, but the MRIs revealed similar brain activity to addicted smokers when viewing the images.

“We found their reward centers lighting up and their cognitive control suppressed. Especially in memory and visual processing and reward,” Chen said.

All of the participants responded more to the e-cigarette ads than the neutral ad images. The issue that can be a cause for concern is that the brain areas that process rewards and control attention reacted the same in both smokers and nonsmokers. The findings suggest the ads are very effective at getting young peoples’ attention and doing exactly what advertisers are intending them to. While researchers didn’t ask if participants planned to buy e-cigarettes after viewing the ads in the study, the findings lend weight to their appeal. Advertisers use traditional techniques such as sex appeal but also push the products’ better taste and they are often touted as less dangerous alternatives to cigarettes.

“That’s the concern we have with these ads, which are largely unregulated at this point, that these are highly attractive to nonsmokers,” said Martin, also associate professor of preventive medicine and public health at KU Medical Center.

The project was funded by a KU Cancer Center pilot grant. Researchers hope to expand their work to develop interventions to increase media literacy in adolescents to educate them about the use of advertising and dangers of e-cigarettes and smoking. Chen has conducted research into media literacy and public health with topics such as skin cancer and sugary drink consumption. Martin and Fowler said they could also expand the work into receptivity, or how likely young people are to purchase e-cigarettes after viewing ads. The findings could also support anti-smoking advocacy and potential regulation, as the FDA currently has very little regulation of e-cigarettes. There is also very little research into environmental effects of e-cigarettes such as “secondhand vaping” or presence of nicotine and other substances in the vapor.

The findings are timely, given that e-cigarette use among adolescents has increased dramatically in recent years. Martin cited a surgeon general’s report that showed only 1 percent of adolescents used e-cigarettes in 2011, while 15 percent had done so by 2015. The products are also changing rapidly, and people are using them in new ways and ingesting substances other than nicotine through them.

“The chances that someone could see these ads and start using the substance are very great, I think,” Martin said. “It supports the concerns of smoking researchers that we may get a whole new generation hooked on nicotine after we’ve made such significant gains in the past.”