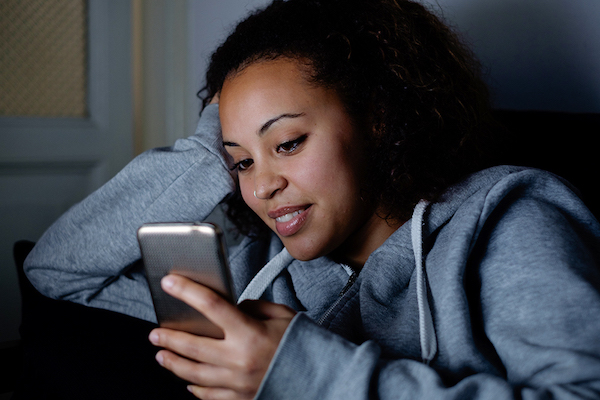 LAWRENCE — The old saying that beauty is only skin deep is borne out by a new study from a team of University of Kansas researchers, the results of which should give Tinder users pause before they swipe left.

In the study, to be published in a forthcoming edition of the journal Communication Studies, Associate Professor of Communication Studies Jeffrey Hall and graduate student Benjamin Compton found that people’s perceptions of potential dates’ attractiveness goes up after they have a positive face-to-face interaction.

Additionally, evaluating someone based on physical attractiveness alone tells you little about what you’ll think about them once you meet face to face.

And finally, rating someone’s attractiveness before meeting them diminishes the rater’s evaluation of that person afterward, probably because the rater is comparing their conversation partner to all the other potential partners they saw online.

“With Tinder and user-directed online dating services, people try to manage the vast number of profiles by picking the most attractive people,” Hall said. “Several researchers have made the critique that that is not the best way to find a partner. We wanted to look at how physical attractiveness ratings change and whether evaluating a person’s photo in a lineup helps or hurts the interaction you’re going to have.”

The researchers randomly divided participants into three groups. In the first group, heterosexual undergrads viewed photos of 10 opposite-sex individuals and rated each from 1 to 10 on physical attractiveness. Then the participants were ushered into a lab, where they met for the first time one of those 10 people they had just rated and had a 10-minute conversation.

“Afterward, they were asked questions like ‘Did you think this person was likeable, charismatic, responsive, smart and funny?’ Then we had them evaluate the same 10 photos again,” Hall said. “Several things happened. There was a significant difference in the attractiveness rating only for the person participants had just interacted with.”

“Two characteristics played an important role in whether the rating changed,” Hall said. “One was social attractiveness, which is whether we think we could be friends. It’s not sexual attractiveness or romance, but likability. The other was combined sense-of-humor or being-a-fun-person measure. If you’re rated more highly in those two things, your appearance rating goes up more.”

Moreover, Hall said, “those who benefited the most were rated mid to low attractiveness to begin with.”

“If you are friendly and have a great sense of humor, you stand to gain a lot by getting your foot in the door. Physical attractiveness is not fixed; it’s malleable.”

As for folks already deemed attractive, the in-person meetings didn’t help improve their score much.

“You didn’t see the same increase for really attractive people,” Hall said. “There’s a ceiling effect. You can’t get much better. For those in the middle, there’s room for improvement.”

The other two groups in the study were participants who did not rate their partner before interacting. One group pre-rated 10 photos, not including their partner, and the other group did not pre-rate anyone at all. The results showed that if you rated your partner beforehand, it decreased your enjoyment of the interaction and your perceptions of your partner’s personality.

“It isn’t rating people that diminishes the quality of a first meeting,” Hall said. “It is rating your conversation partner in comparison to ostensibly available others.”

One interpretation comes from economists’ General Evaluability Theory. It says you become committed when you think you’re in the driver’s seat in your choices. The more online daters feel empowered to choose, the more committed they are to the choice they make.

“Online daters understandably become overwhelmed with the number of choices,” Hall said. “You reduce your evaluation of your conversation partner because you saw more attractive choices that you think you could have had. It makes your in-person experience worse. ”

Hall suggests that daters ask themselves, “Would I really like to spend time with this person? Rather than go through hundreds of photos, digest a few at a time. Slow down. Be more careful about considering who you’re going to date. And if that person’s personality is wonderful, your evaluation of their physical attractiveness will follow.”